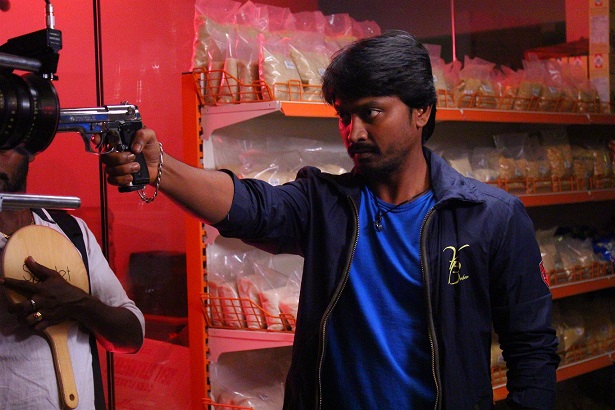 The days of Eclipse (Graghanam) will always have a close connect with humans because of the rare miraculous view of the planets. By keeping that miraculous term as the title, a new Tamil film – GRAGHANAM has arised in Tamil film industry, which is receiving accolades for its first look. Produced by I.B. Karthikeyan under the banner ‘Big Print pictures’ in association with Saravanan of ‘KR FILMS’, the film ‘Graghanam’ is directed by debutante Elan who is well known for his short film works. Elan’s famous short film V-Chithiram has bagged several awards and it has also nominated for the prestigious ‘Ladakh International film festival’. And now the talented filmmaker is stepping into Tamil film industry by his first feature film ‘Graghanam’.

Starring Krishna who is in the purple patch of his carreer with a line up of more than six films slated to release this year and ‘Kayal’ Chandran one of the most promising young actors in the fray, ‘Graghanam’ has karunakaran, karunas, Jayaprakash & Black Pandi in the pivotal roles.The role of the female lead in this film demanded a bold and beautiful performer and New comer Nandini Rai fitted into it with pefection. ‘Graghanam’ is also well backed up a bunch of talented technicians that includes Cinematographer Saravanan, Music Director Sundaramurthy and Editor Mani Kumaran.

“After the massive response from the Audience for my short film V-Chithiram, I started scripting my first feature film, and here it is – Graghanam. ‘Graghanam’ is a Bone chilling Thriller movie based on two incidents through which the characters of the movie are looped very well and interesting.

Apart from thriller content, we have included enough commercial factors which helps to entertain the Audience thoroughly. I would like to thank my producers IB Karthikeyan and Saravanan for giving me full freedom and support. Our ECLIPSE is all set to illuminate very soon” says Elan, the Director of ‘Graghanam’ enthusiastically.