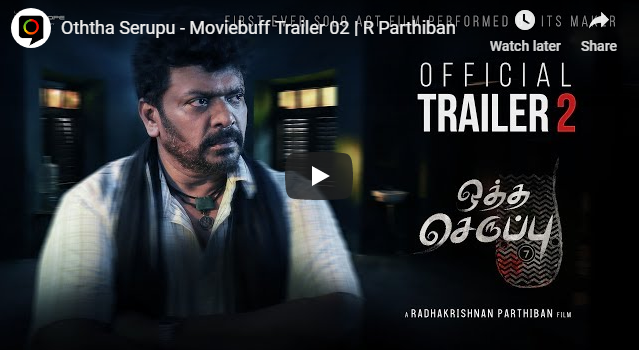 The multi-faceted Parthiban is soaked in the unconditional downpour of praises from the most celebrated Superstars of Indian film industry in the new visual promo of his upcoming film ‘Oththa Seruppu Size 7’. From our own Superstar Rajinikanth, Kamal Hassan, Director Shankar to Aamir Khan, Chiranjeevi, Mammootty, Mohanlal and Yash, they have rendered their inmost acclaims on the actor for his incredulous feat of accomplishment of producing and directing a film that features him as a solo actor in the film. Superstar Rajinikanth sends out his praises saying that this is something amazing and such efforts should be recognized on International platforms and the film should be submitted even to Oscars. Kamal Hassan says, “Obviously, Parthiban has now joined the league of Hollywood actors Robert Redford and Tom Hardy for playing solo lead role.” Megastar Chiranjeevi says, “This film is a very unique and cinematic experiment by my friend Parthiban. Actor Aamir Khan says, “This is something very unusual and new. It sounds very exciting.” Kannada Superstar Yash says, “Parthiban sir has always travelled into the unexplored zones, which we all actors fear to experiment with.” Director Shankar says, “This is called One Man Show. The film’s title is Oththa Seruppu Size 7, which instills a sense of ‘Mystery’ to find out whose slipper it is actually.” The new visual promo also includes the wishes and appreciations from Academy Award winner Resul Pookkutty as well.

Well, if you think these superstars sharing their wishes and positive opinions about the film and Parthiban is great and phenomenal, the way he has edited and placed it along with the film’s drama reaffirms that his creative sparks are unceasingly adorable.