Jackiecinemas
Home Cinema News 360 Thozhar Is A Word That Can Be Used To Refer To Anybody... 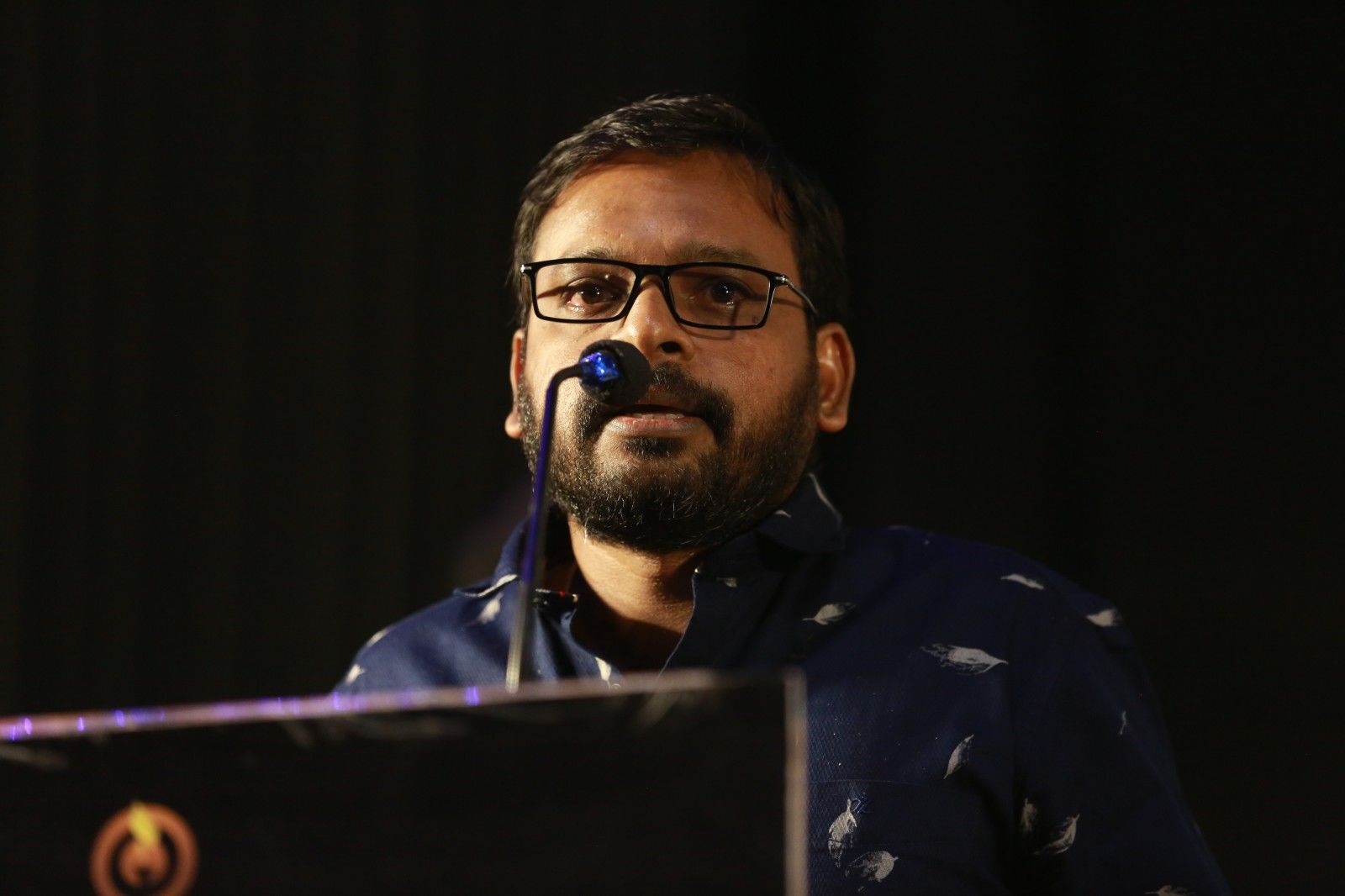 A single track called Very Very Bad from National Award winning director Raju Murugan’s next film, Gypsy, was released amidst much fanfare on Tuesday at the Prasad Lab in Chennai.

Lyrics for the refreshingly honest number with bold lyrics has been penned by lyricist Yugabharathi and the music for it has been scored by music director Santhosh Narayanan. The director and his crew released the single track in the presence of the media.

Speaking on the occasion, Yugabharathi jokingly said, “I have always looked to uplift Raju Murugan and he has been making attempts to send me to
a prison.He has been trying to make a film and send me inside. I don’t know if it will happen in this film or in his next film.”

On a serious note, the lyricist said, “The most important reason for this film materialising is my friend Ambedkumar, the producer of this film. Had he not been prepared to make this film, this film project wouldn’t have materialised. Overcoming obstacles, we made this film and we rejoiced while making it. It was possible to make a film like Gypsy only because of a producer like Ambedkumar.”

Talking about Jiiva’s efforts in the film, Yugabharathi said, “This will be an important film in Jiiva’s career. He prepared himself extensively for this
role. He had to grow his hair for six months and travel all over the country and walk extensively. He has had to suffer injuries but Jiiva sportively did all
of that.”

Talking about the single track, Very Very Bad, Yugabharathi said, “When we asked the message that needed to be communicated through this song, those who are protesting on the ground today against injustice agreed to come and act in it for us. More importantly, they stayed with us an entire day and shared their thoughts. At this point, we gratefully remember and acknowledge the contribution of Ayya Nallakannu. The honour of having directed him for the first time will belong to my younger brother Raju Murugan. I do not have to tell about Raju Murugan’s writings. Although I might exaggerate a little as I consider him to be my younger brother, he has consistently been striving to struggle and write against the injustices in society.”

Producer Ambedkumar of Olympia Films, while speaking on the occasion said, “Raju Murugan is a good friend of mine but I did not expect that I would do a film
with him. However, I did have the intention of making a film with him someday. One day, Ma Subramaniam wanted to know if I could suggest somebody to be the
chief guest for a sapling planting event. I suggested Raju Murugan’s name. After the event, when I was dropping Raju Murugan back, he asked me if we could
make a film together. I was very happy. He is a good man, a good director who has given successful films. I agreed. I never expected that he would tell me
the story though. One day, he said, ‘ Sir, if you are free, shall I narrate the story? After work, I listened to his story and liked it very much. I like
Jiiva very much as I have enjoyed his performances in several films like Dishyum and Ko. I asked Raju Murugan how would it be if Jiiva played the lead in
this film. Raju Murugan felt it would be great. We decided to approach him and he liked the story and immediately agreed to do it. We need to thank Jiiva sir
because I do not know if whether he has made such a huge effort for any other film as he has had to make for this film. I take great pride and happiness in
having produced this film. I thank director Raju Murugan and his team for having given me this film.”

Director Raju Murugan, who spoke next, said, “When we thought what will serve as an identity to this film, we wanted something like this song to be its
identity. Therefore, I wanted to showcase such a song to you. I wish to thank Producer Ambedkumar sir, who is the first and foremost reason for the creation
of this film. If I did not get a producer like him, I wouldn’t have been able to make such a film now. I might have made it sometime later but I wouldn’t
have been able to make it now. He has spent a lot as the expenses were more because this is a travel film. He co-operated a lot. One other important reason for
this film getting made is Yugabharathi.”

Giving out more details about the film, Raju Murugan said, “Jiiva being the hero of this film is one of the important reasons for this film moving to a valuable position. Otherwise, I wouldn’t have been able to make it at this budget and with this kind of space. Jiiva has stood by us. This is a completely heroic film. It is a very fair film. This is not a political film. This film is not based on caste or on an organisation or an entity. As far as I am concerned, life and politics aren’t two different entities. My invites had music director Santosh Narayanan as being referred to Thozhar (Comrade) Santosh Narayanan. Immediately, people asked me, ‘You have made Santosh Narayanan a comrade’. Thozhar is one of the most magnificent words. It is not based on a party. It is a word for love. It can be used to refer to anybody who fights for justice. It can be used for anybody who takes a stand against injustice. They are all Thozhars. In this movie, Gypsy is a Thozhan.”

“This film is a completely romantic musical film. It has a little bit of politics in it. By politics, I mean the humane aspect of mankind –the space to discuss humaneness or kindness. That is all. My only desire is that my film should make for my producer, at the minimum, the money he has invested in it. I believe my film will definitely achieve that because there is a space for that. This film is a complete commercial package. My cinematographer Selvakumar’s work in this film is extremely significant. I thank him for bearing a lot of hardships — from the cold weather in Kashmir to the heat in Nagapattinam –while working on this project for a year. ”

On music director Santosh Narayanan, Raju Murugan said, “This is completely a musical film. It has nine songs. Santosh Narayanan could not make it today but I thank him for having given the music that this film required. More importantly, I wish to thank all those who appeared in the song Very Very Bad including Nallakannu Ayya, Thirumurugan Gandhi and Muhilan. They all extended immediate support by agreeing to make an appearance in the song. ”

Talking on the occasion, actor Jiiva, who plays the lead in the film said, “My reaction when this story was narrated to me the very first time itself, was that this was a very fair and sincere story. There was a truth to it. Raju Murugan sir narrated this story to me at my home. He only narrated a line. He said, ‘ A folk singer travels all across the country and then how he turns into a rebel singer. The reason for this change is love. He goes in search of his love.’ This is a humanity based film. This film is about celebrating humanness and nature. This film will be a reality check to many people. They will be able to relate to it. We have tried to say that all people are the one and the same. The human emotions are the same.

“I have acted with a horse in this film.The horse was with me through the film. They wanted me to sport a particular get up for this film. I had to sport that Gypsy look. I had to train to handle the horse.We travelled extensively across the country. Every frame will be beautiful and it will tell a story by itself. There was great attention to detail. Cinematographer Selvakumar has shown it all beautifully. We shot this song in Nagoor. When we played this song, the general public outnumbered the junior artistes and then itself we knew that this song was being received well,” Jiiva said and added that he was very happy to have done this film.