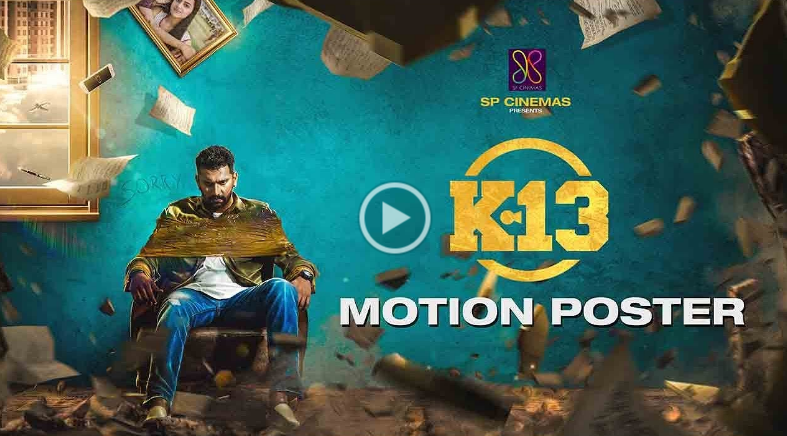 While it becomes a natural essence of an actor’s name prefixed with some titles, Arulnithi has significantly gained a reputable one as ‘Content-Driven’ hero. His curious aspirations to travel on such unique roles and scripts have carved him a niche of respectability among the universal audiences. Of course, his upcoming film ‘K 13’ promisingly looks yet another illustration of such attempts from Arulnithi and the posters have already filled audiences with pretty good expectations. More than all, the Motion Poster that is launched now has appealed instantly with upgrading the level of curiosities.

Much equally to the screen presence of Arulnithi, what’s more engrossing is the ‘House’ element, which is being repeatedly registered through the motion poster as it happened before with promotional posters. Be it the objects floating around in an anti-gravity environment (metaphoric?) including a mobile phone, script papers with character images or the green tinted walls, every element has managed to register deep curiosity within. Ask filmmaker Barath Neelakantan and he says, “The house plays a major backdrop in this film as signified by the title K 13 and we want to prepare the audiences to get settled with that ambience. When the motion poster gets an overwhelming response, which we are sure of, all credit goes to Venky the Designer / Animator, Sound Designer Udhaya Kumar and Music director Darbukka Siva.The unique aspect of the motion poster is the sound is mixed and mastered in 3D for social media which is being done for 1st Time in Tamil Cinema for a Motion Poster

Featuring Arulnithi and Shraddha Srinath in lead roles, K 13, the edge of the seat thriller is produced by SP Shankar and Santha Priya for SP Cinemas.