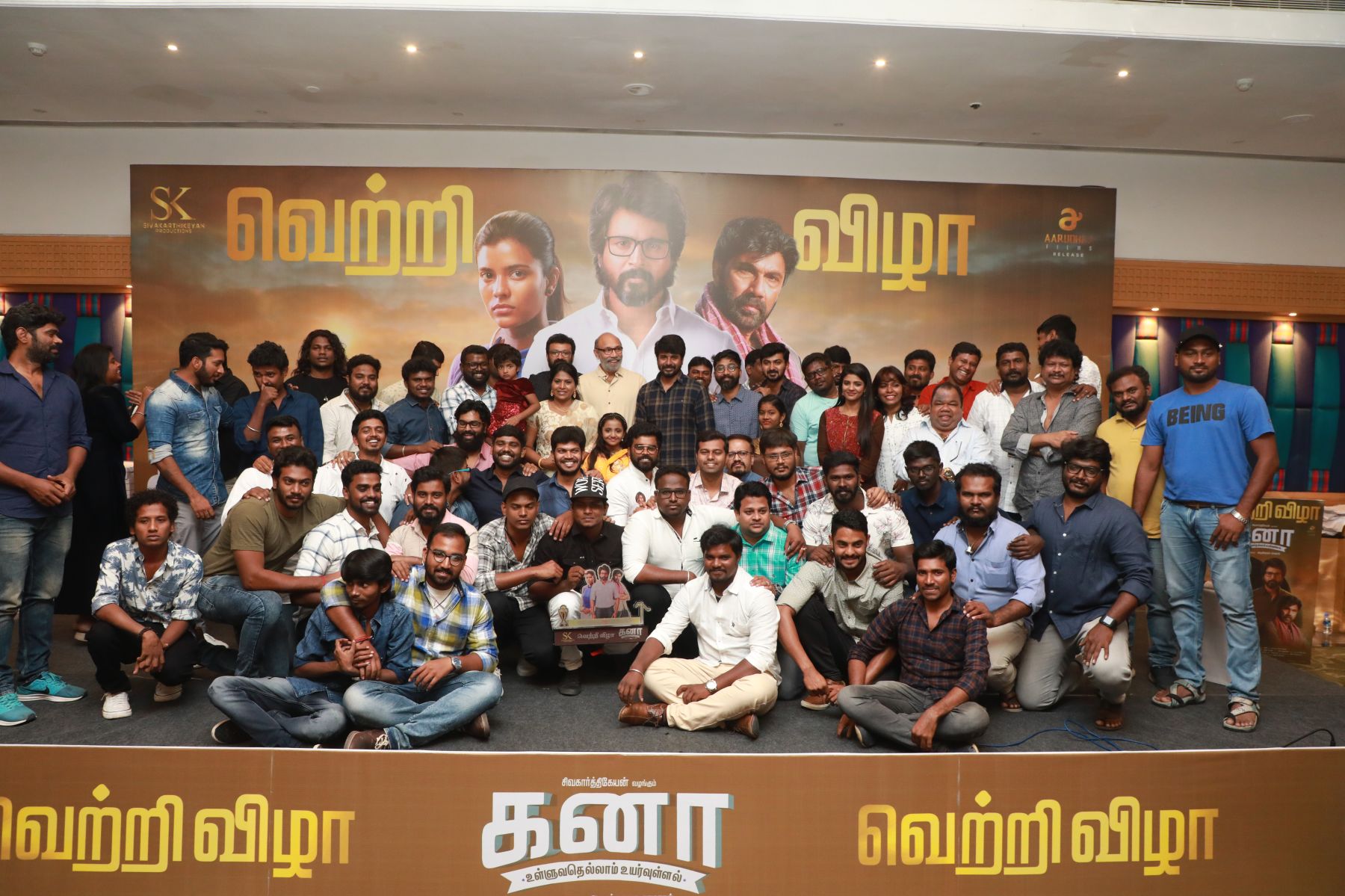 The entire team of Kanaa found itself in high spirits and the reason was the grand success of this film. Every team member were honoured with the shields as a token of success. Here are some of the excerpts from Kanaa success meet.

Editor Ruben said, “Sivakarthikeyan looks so much silent and call despite accomplishing a wonderful success. I thank him for being so much supportive and banking his trust on me. Aishwarya Rajesh has made a trenchant mark by scoring brownie points while contesting with other big heroes.” He jocularly added saying, “I am the only villain in the film as I have been invoked in such a task of deleting and editing the scenes. Darshan has been a great support of offering good entertainment factors.”

Art Director Lalgudi Ilayaraja said, “All credit goes to Arunraja Kamaraj for crafting a good story and presenting it colossally. If not for such attributes, this would have not been possible.”

Cinematographer Dinesh Krishna said, “It’d been an unforgettable experience working in this film and am happy to be a part of such a successful film. Every actor in the film carried their portions very well. We couldn’t get the same cameras used for capturing live cricket matches as they were expensive. But we used the available cameras and with the help of production team, we were able to bring in good output.”

Lyricist GKB said, “It’s been a struggle of 8 years and I am now elated to be a part of success through this team. I have written few songs before, but the song “Vaayadi Petha Pulla” gave me a good recognition. If not for Arunraja Kamaraj, Sivakarthikeyan and entire team of Kanaa for being so much supportive.”

Lyricist Mohan Rajan said, “I gained an unbelievable recognition through this film. I am running short of words and am really thankful to the entire team.”

Music Director Dhibu Ninan Thomas said, “Hard work and trusting each other in the team were the responsible reasons for the film becoming hit. I want to be a part of the team’s successful ventures in future.”

Actor Ilavarasu said, “I had been so much conscious throughout the occasions such as audio and promotional events refraining from over-hyped statements. But this is a moment I feel can openly talk excited. I thank Arunraja Kamaraj for crafting a beautiful emotional story, where I could relate personally as I am a father of a girl.”

Actress Rama said, “I would like to thank everyone, especially Director Arunraja Kamaraj for giving me an opportunity to work in this film. Aishwarya Rajesh will definitely win more awards for her spellbinding performance. It was fun and great unforgettable experience throughout the movie. After long years of aspirations, I got an opportunity to work with Sathyaraj sir.”

Actor Darshan said, “I am so much glad to have got this opportunity of being a part of this team. I will be ever thankful to Sivakarthikeyan brother throughout my life.”

Actress Aishwarya Rajesh thanked press and media saying, “Its press and media that gave good reviews and it eventually helped the increase in screen counts. It’s a rarity to get an actor without any knowledge about cricket to play a cricketer role. But I thank Sivakarthikeyan and Arunraja Kamaraj for banking their hopes on me and getting me on-board. Sathyaraj sir reminded me off my father and it’s been an emotional experience. I lost my father at the early age and Sathyaraj sir gave me an idea of how it would have been if he was alive.”

Actor Sathyaraj added up heavy dose of humour following which he delivered an emotional note saying, “Sivakarthikeyan’s good hearted nature for helping his friends and it has come out very well with a beautiful result. More than saying this as a help, it’s an amalgamation of good people and team coming together for a wonderful movie. The success of such movies like Kanaa will definitely change the dimension of cinema. The quantity of female centric movies got declined as the emergence of tv serials occurred. I am so happy that Arunraja Kamaraj has broken the barrier and bringing back the trend.”

Filmmaker Arunraja Kamaraj rendered an emotional speech thanking each and everyone in the team. “Sivakarthikeyan brother has been so much helpful in letting my dream come true. Darshan is my sweet brother and his every success will make me feel happy. Everyone in the team have been like my brothers. Dhibu Ninan Thomas has been the backbone of this film and cinematographer Dinesh Karthik along with his whole team have contributed a lot. Sathyaraj sir was down to earth and so pleasing throughout the project. My assistants and everyone have been the core reason of this success.”

Actor-Producer Sivakarthikeyan said, “The starting point of this success happened with the press show, where the strong reviews with positive talks spread like groovy vibes, which continues on the successful notes. I thank Aaradhura Films Aravind, who took up the distribution efforts across Tamil Nadu. I thank theater owners for their earnest support and public who have carried the film on their shoulders. I wouldn’t say this a help to Arunraja Kamaraj, but my duty and responsibility and he and his team has given me double delight with a successful project. Aishwarya Rajesh will be definitely have huge projects in the near future. Sathyaraj sir has been a part of important films in my career. Be it Varuthapadatha Valibar Sangam that was a changing point in my career and now Kanaa that is my maiden production. Musical score by Dhibu Ninan Thomas has been the major reason behind the success of this film. My next film is with cinematographer Dinesh Karthik brother and he will be handling camera for my next with director Rajesh. His team is like Dhoni team as everyone will understand what he wants with mere silence and few words. Ilayaraja brother had a lot of challenges where he didn’t have anything to erect set works but added up naturally. Actor Darshan has done a good job and I want to him take this as a careful point and proceed with more focus and dedication. More than all, Friendship is the core pillar of this success and I am blessed to have them. The film’s final episode had conveyed message and with audience making it a good hit, a portion of the film’s collection will be contributed towards the needy. We are now working on our next production with the Black Sheep team and even my next movie as hero is getting ready for release.”