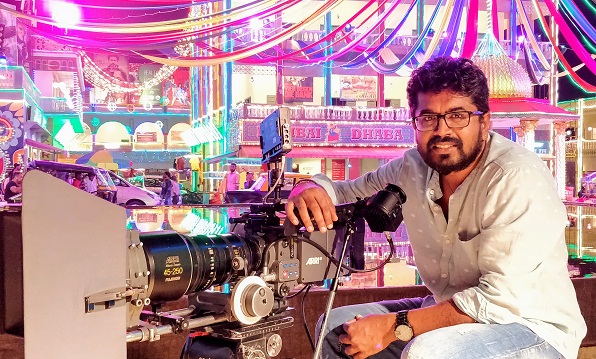 When we come across the cinematic terms like ‘Festival film’, we are obviously taken to the zone of colourful visuals and the magician behind the lens. In all such stronger possibilities, cinematographer Vetri has been holding a decorous position under spotlights for presenting a colourful trailer of Ajith Kumar starrer Viswasam. While the trailer comprises of so many mass moments, Vetri reveals what was the most challenging part in this film.

“Of course, the introduction scene of Ajith sir was the most challenging thing. It happens that every filmmaker working with him would give different introduction scenes that have massy and classy appeals. However, when it comes to Siva, the situations were entirely different as he has already worked with him in three films. So we had to go through lots of discussions with the team to try something different in Viswasam,” says Vetri. With a much curious desire, we tend to get something more interesting about Ajith Kumar’s introduction and he says, “For the moment I can say is that it will be a worthy treat for fans and audiences. This drama involving the way everyone waits for him, his arrival and what he does after it will involve enjoyable moments.”

When it comes to trio combo of Ajith Kumar-Siva-Vetri, ‘Theatre Moments’ become the top priority of fans. In this regards, Vetri opines, “Yes, there are lots of theatre moments in the film for fans to whistle and celebrate. But as far as I have seen, it’s been a long time that Ajith sir had essayed such an entertaining role in the past 10-12 years. Even when it comes to our previous films – Veeram, Vedalam and Vivegam, his roles were sketched with seriousness. Whereas Viswasam will have him unleashing the entertainer avatar, where fans will have a blast and general audiences will love him.He had also displayed his emotional angle to such an extent that iam very sure the audience will feel connected to the protagonist “Thookku Durai” emotionally too.

As the story is set against both urban and rural backdrops, cinematographer Vetri emphasizes an interesting fact. “Since, the story is placed in two different backdrops, we have used different colour scheme. When it comes to action sequences, the most challenging part was the rain episode and I believe audiences will enjoy it.”