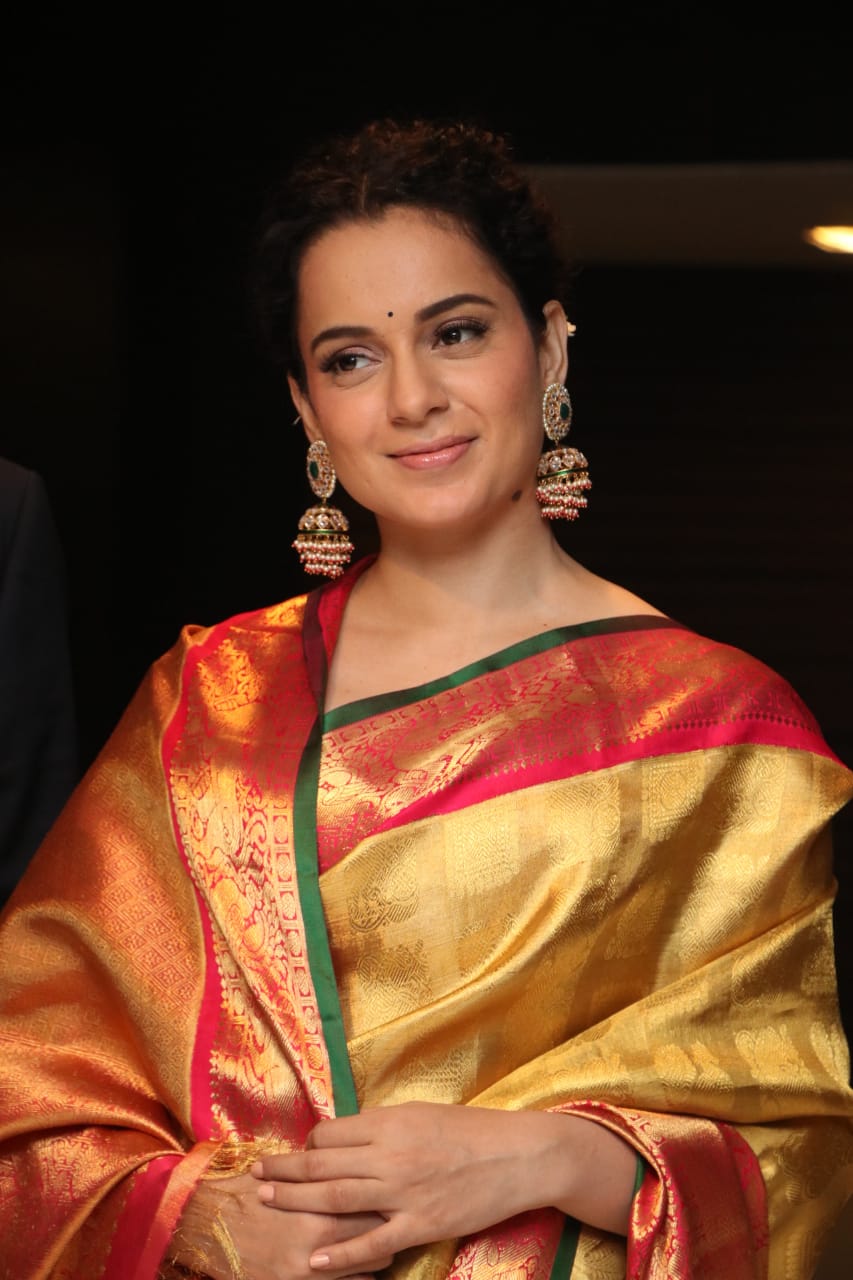 The special invitees involving Tamil Press and Media were stormed by the fascinating trailer of Kangana Ranaut starrer ‘MANIKARNIKA TAMIL TRAILER’. Well, the instant inquisitiveness that popped up in everyone’s minds was all about the challenges that the entire team would have gone through while creating this epical drama. Produced by Zee Studios in association with Kamal Jain at a whopping budget, the film is directed by Radha Krishna, Jagari Amudi and Kangana Ranaut, which is scheduled for worldwide release on January 25, 2019.

The most admired Kangana Ranaut made her graceful presence with the traditional Tamil attire, which turned the spotlights on her instantly. Here are some of the excerpts from the media interaction session that happened in Chennai.

Producer Kamal Jain said, “The entire life of Rani Laxmibhai of Jhansi has been filled with incessant struggles. Being a young mother, warrior and what else, the saviour like personality of the region, when it desperately wanted her to be, she has faced lots of challenges. In all likelihood, to bring up a biographical movie of her life had placed lots of challenges upon us as well. I am feeling so much fortunate for being a part of this film, which has a wonderful script and story. I am so much sure that none other than Kangana Ranaut would have breathed soulful life into this adorable character. When I say challenges, it weren’t confined to her avatar as an actor, but as a filmmaker as well, where she accomplished it efficiently.”

Actress-Director Kangana Ranaut on her part said, “This film speaks about patriotism and sentiments of being a patriot. I feel more fortunate for getting to work in a film like this after a long journey in my career. I feel very much shameful to have not thought about taking up such projects and finally feel happy for it has happened. Of course, in this contemporary situation, the focus has predominantly been upon the men-women love, the physical nature of love or something involving an individual. Of course, being in a country that faces lots of crisis, such romantic quotients might look fresh for us on the big screens, but we can go beyond it and do certain things that are sentimental in nature.”

While speaking about her experience of shooting for action sequences, she adds, “OMG! It was actually more challenging. When I started shooting, I was so fragile. Just imagine my skinny physique of 50Kgs weight and undoubtedly, I never looked like a warrior. In fact, I couldn’t practice the action scenes for more than 30 minutes. Precisely ,the action choreographer and his team were little worried and doubtful, whether I would look convincing as a warrior for my stamina was very low. Gradually, I started gaining weight and with 10-12 hours of every practice, I managed to pull it off somewhat convincingly. The journey involving the galloping on horses, hand combat and sword fights, sometimes with original swords commuted me to a different world.”

Just when she was asked about juggling between the actor and director’s role, Kangana Ranaut opined, “It was not at all an easy experience. While it was all about the action sequences, it was handled by Krish (Radha Krishna) very well and I took over the dramatic episodes. Nonetheless, nothing got easy out there and it was a challenge of every moment. Usually, being an actor could be little relaxed as one can get back to the caravan and keep a regular watch on make-ups, but then with the directorial task, I had to keep running here and there, especially with those long sprawling costumes to have a run towards monitor was a huge task. By the end of day, nothing seemed as a constraint and it was a wonderful experience. I had spent more time working in pre-production with lots and lots of discussions over the script. Personally, I felt that spending more time in this phase will eventually lessen your pressures and obstacles on the sets.”

Giving her personal comment of playing Rani Laxmibai of Jhansi, Kangana said, “Usually, it’s easy to play a character filled with weakness and flaws, but to take up the role of someone, who has lived and left foot prints of patriotism and love for the land, someone with a spiritual essence and golden heart sent me some uncomfortable waves by the initial phase. It demanded for lots of devotion, trust and faith, which is not easily available. I am happy and proud to have been a part of such a prestigious film.”

Winding up with the media interaction session, she was asked on what other period character she loves to enact on the big screens apart from Rani Laxmibai. She instantly gave a surprising and suspense element saying , “I aspire to make a film, which would be mother of all epics, say, somewhere 10,000 years back in time, but I will not revel it now.