Jackiecinemas
Home Cinema News 360 Inauguration of the 92nd Annual Conference and Concerts 2018 of The Music... 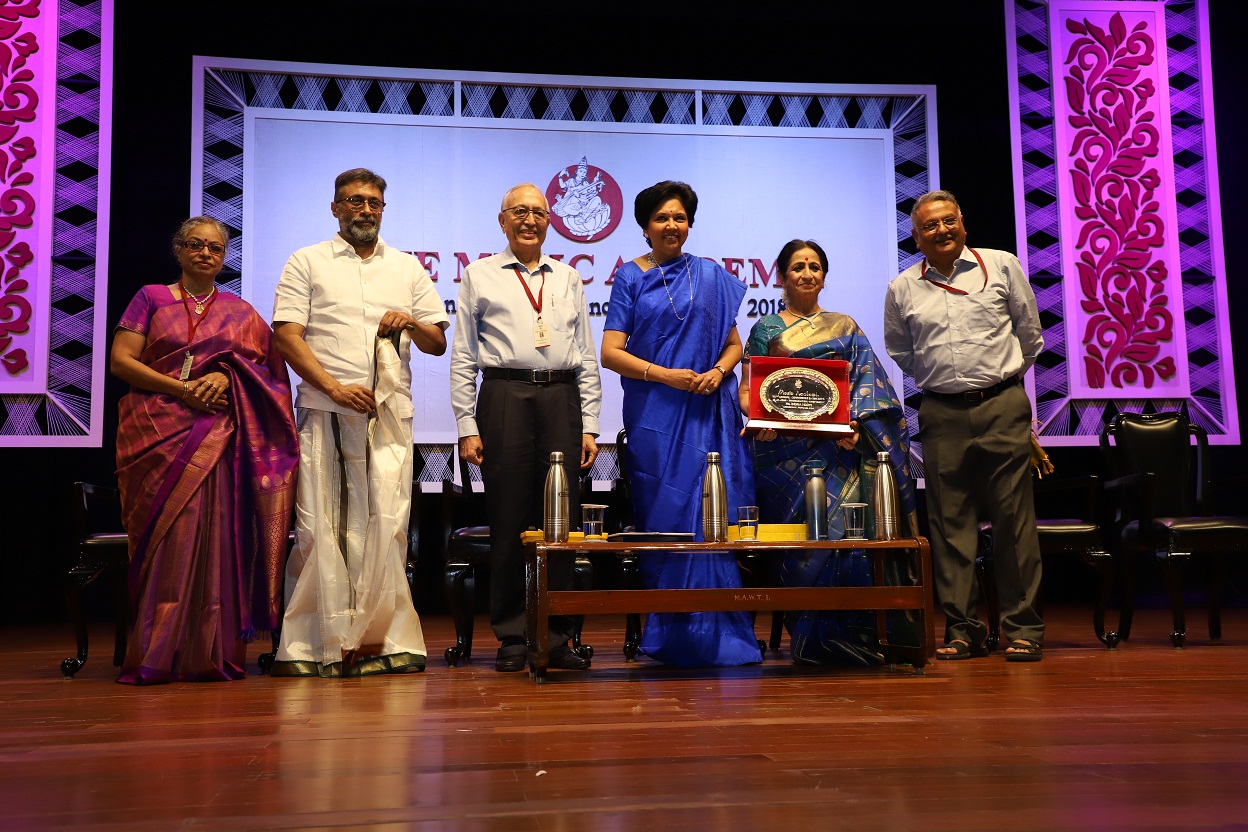 On the occasion of the inaugural ceremony of the 92nd Annual Conference and Concerts 2018 of the The Music Academy on December 15, 2018, Ms Indra Nooyi, Chairman, PepsiCo, USA, honouredSmtAruna Sairam, Sangita Kalanidhi Elect 2018 who will preside over the Music Academy’s Annual Conference this year and will be conferred the title of the Sangita Kalanidhi on January 1, 2019.

The event began with N Murali, President, the Music Academy, introducing the Chief Guest, tracing her journey from Madras to becoming one of the most powerful women in the corporate world. He also announced the names of all the artistes who will be receiving the many prestigious awards instituted by the Academy.

Graciously accepting her invitation, Aruna Sairam delivered a warm and powerful acceptance speech acknowledging every single member who has been an integral part of her musical journey. “I stand here with happiness and humility… This moment comes to me as a culmination of a journey that began when I was a wide-eyed little girl tagging along with my family that descended upon Chennai for the December season, absolutely star-struck by the great vidwans and vidushis who strode the hallowed lobbies of the Music Academy. “ Aruna Sairam thanked her mother, her gurus, mentors and members of her family – husband, daughters – all of whom have been integral in shaping her musical career. Acknowledging Indra Nooyi’s presence, she said, “My delight and happiness at Smt Indra Nooyi’s presence here is beyond words. I have emulated many of her philosophies in my life; each of them of lasting importance. For instance, to quote her, ‘At the end of the day, don’t forget that you are a person; that you are a mother; that you are a wife; that you are a daughter.’ I believe that this ideology has kept me firmly grounded and secure. At this point, I urge all women to hold hands and be the bulwark to others; to hold hands and support each other.”

In her inaugural address, Indra Nooyi, recognised the glorious tradition of the Music Academy, the role it has played in nurturing the classical art and emphasised the need for rejuvenation and renewal; to embrace change and think deliberately about the future. “Chennai, the city I grew up in, is transforming into a global metropolis and it is a fantastic opportunity for the Music Academy to embrace the change around and usher in a future that remembers the past and celebrates a glorious future.”

India’s renowned vocalist Padma Shri Awardee Aruna Sairam is widely acclaimed as the most illustrious exponent of classical music. MsAruna Sairam is a Carnatic vocalist, composer, collaborator, mentor, humanitarian and speaker. In addition to her sellout performances in India, from little hamlets to RashtrapatiBhavan, MsAruna is hailed as a Music Ambassador who has taken Carnatic music to the global arena, to prestigious venues including Royal Albert Hall, London, Royal Festival Hall, London and Carnegie Hall, New York. Currently Vice Chairperson of SangeetNatakAkademi, Ministry of Culture, Delhi, wherein she is engaged in shaping the policies of the Indian Government towards the performing Arts.

Aruna represents a long line of eminent women singers, her Guru T Brinda being the eighth generation of pre-eminent musicians of the Tanjore Court. Aruna has been mentored by several masters throughout her musical journey. Aruna sings in 14 different Indian Languages as also in world languages. By interacting with national and international musicians, Aruna communicates beyond regional contexts, using melody as a language of human expression. She has performed duet concerts with renowned musicians like Mandolin U Srinivas, Ustad Zakir Hussain, Bollywood singer Shankar Mahadevan. She has collaborated with leading European musicians and presented Carnatic music with Classical Liturgical, Medieval and Gregorian Chants, Arabo- Andulasian, Flamenco and Neo-Classical Music.