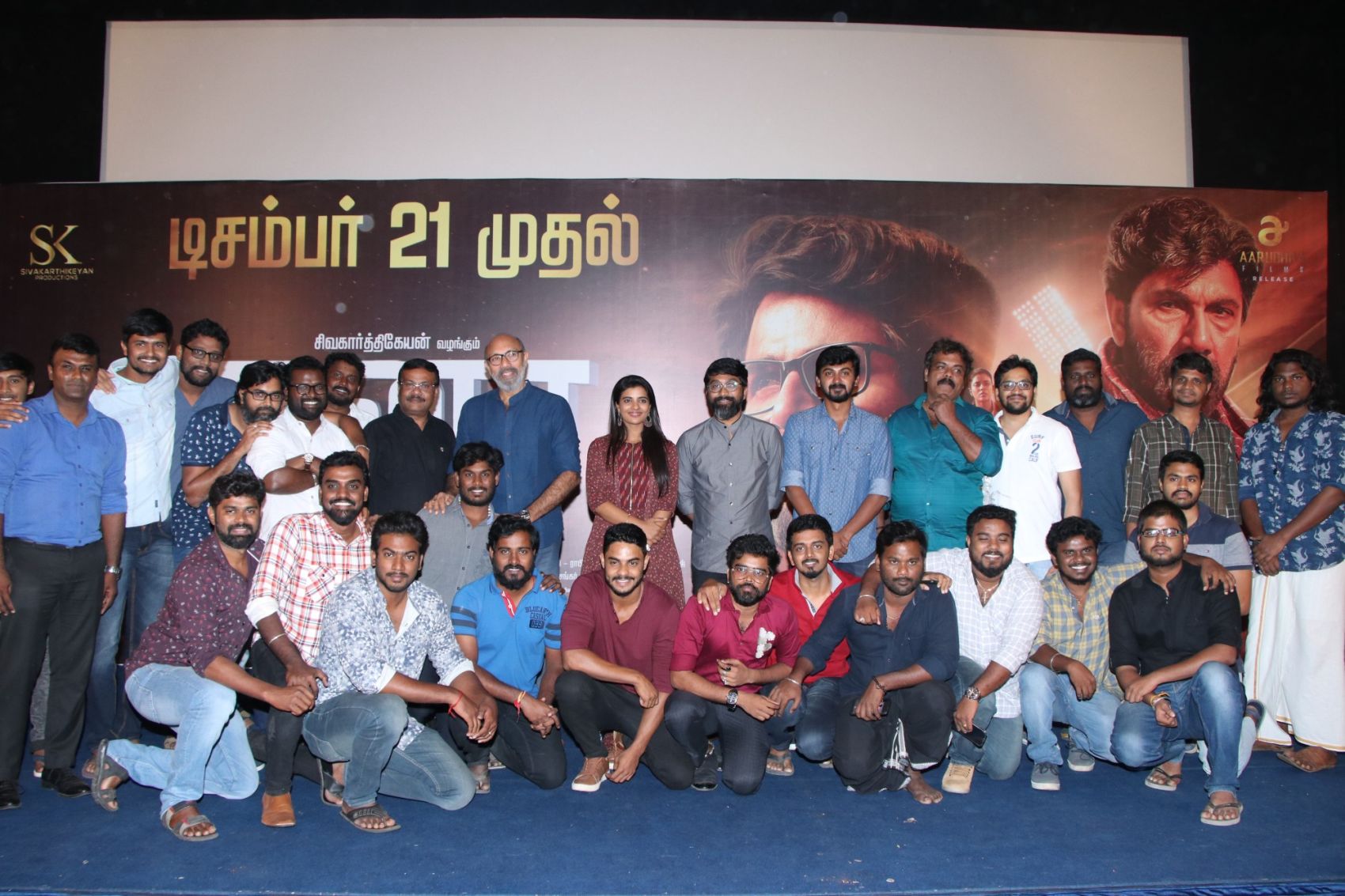 The promising team of “Kanaa” looked High spirited during the occasion of the pre-release event that was held at Prasad Lab in Chennai. The occasion commenced with the screening of ‘Making of Kanaa’, Sneak Peek and visuals of players from Indian and Australian Women Cricket Team.

Aishwarya Rajesh said, “I lost my father at the age of 10. When working with Sathyaraj sir, I would imagine that my father would have been the same now if alive. I had some
emotional connect with father in Dharmadurai, but in Kanaa, it travelled throughout the show. Darshan has a wonderful screen appearance and he will be recognized as a good actor in this film. Ilavarasu sir was truly encouraging as he would often take personal interest in the escalation of my career. We as a team have done a new experiment and attempt.”

Actor Sathyaraj said, “What I liked about producer Kalai is his nature to felicitate the Sound engineer and Sound mixing person on stage. Because these days, the technicians don’t get more Focus. Aishwarya Rajesh’s hard work was unconditional and in spite of not knowing cricket, she underwent huge practice and made it happen on par with the real life cricketers. Everyone in the team have “Kanaa” and I have something huge and bigger than all. I dream bigger that Kanaa. becomes successful in China as well. Arunraja Kamaraj has deep insight into many social subjects. When a filmmaker like Arunraja Kamaraj who has insight about social welfare must win as it will be a win-win situation for both him
and well being of society.”

Director Arunraja Kamaraj said, “Dream big is the ultimate concept of Kanaa. I myself have been filled with such dreams and kept working for it. One day Sivakarthikeyan asked me if I have any script. He told to bring me something big and I narrated him the one line of a tale based on Women Cricket. Feeling the freshness and first of its kind, he gave a nod to proceed with the full bound script. There were lots of friends besides me to help me shape this script. The film will have a different pattern of narration in first and second half, where editor Ruben came into the picture and helped us in finest output. Cinematographer Dinesh would keep encouraging me that Ideas have no budget and we have to think big. Usually many movies have given the picturing of real cricket matches, but for the first time we have tried giving a feel of watching it in TV. For the first time when I narrated script to Sathyaraj sir, I was literally nervous, but he encouraged me to proceed and gave his nod. I have to thank each and everyone in the team for being unconditionally contributing towards the film.”

Co-producer Kalaiyarasan said, “Initially when Sivakarthikeyan and I decided to make the film, we were clear about 3Cs – Cost, Cast and Crew. We are so much happy that we got a good team for our Maiden production. Everyone has given their best into the film. When Sathyaraj sir got into the film, the size of Kanaa got bigger and I am sure,just like Kattappa, he will known as MURUGESAN in Tamil Nadu. If we all had to sweat for this film, Aishwarya Rajesh had shed blood am sure her hard work will be paid off well.”

Sound Designer Azhagiya Kooththan said,“Kanaa isn’t just about cricket, but will emphasize the importance of agriculture as well. Everyone in the team have been in the same frequency that mutually helped us to give our best.”

Sound Designer Suren said, “I am feeling elated to have been working in SK Productions’ first film. We have recorded lots of cricket Sounds. The final 30 minutes of this film was more challenging for sound mixing and am sure audience will enjoy it well in the theatres. Working with Arun is more like playing cricket than working in a film…”

Editor Ruben said, “The reason for being part of Kanaa are three people – Arunraja, Sivakarthikeyan and Kalai. Every character in the film will entertain and emotionally imbibe us. I became editor at the age of 26, but if I had a father like Sathyaraj in this film, I would have made it by 20yrs. I request everyone to watch that film in theatres as such movies has to be appreciated.”

Actor Munishkanth said, “I
had worked in the film only for couple of days and felt that it could be a guest appearance. But after working in the film, I could feel the substantiality of the role.”

Actor Ilavarasu said, “The characterization of Aishwarya Rajesh is very well written that reflects the village girl. I am sure,she will be highly appreciated for her hard work and performance. The landscape of this film comprises of both dry and pasture lands. Thanks to cinematographer for being so much efficient in looking for perfect backdrops.”

Actor Darshan said, “Just as the title Kanaa, I had a huge dream of making into film industry. I am so thankful to Sivakarthikeyan Anna for making my dream come true. Everyone has done a hard work in the film. Especially, Aishwarya Rajesh had given the uttermost effort. Despite the huge injury, she continued to shoot for the film. Working with Sathyaraj sir was like a school experience and it was great working with him. If not for Arunraja Kamaraj, this would have not been possible. Once Sivakarthikeyan brother made a surprise visit to the shoot and wanted to see my footages. I was standing outside carvan nervously and he came back saying that I have exceeded his expectations, which propelled me to perform more.”