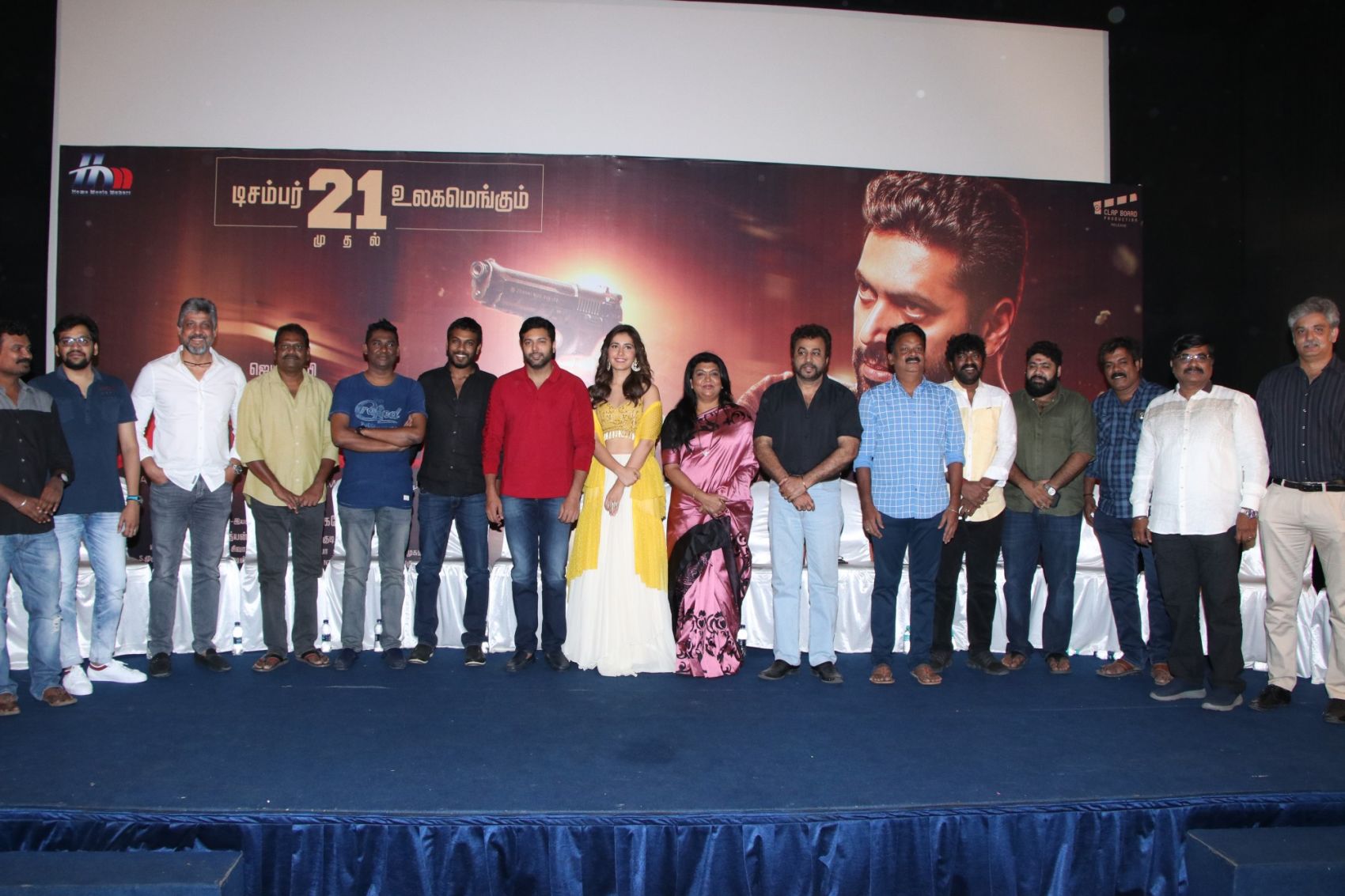 Jayam Ravi-Raashi Khanna starrer Adangamaru is scheduled for worldwide release in December 21 and the entire team was present for the Pre-Release Event that was held this morning in Chennai. Here are some of the excerpts from the event.

Actor Jayam Ravi said, “While most of my hits were delivered by newcomers, I am sure Karthik Thangavel will the next one. Karthik told that I had insisted him to tone down the strong impact. I had asked him to give the film to audience just as we would sugarcoat the pills for a kid. Later, he understood the concept and eventually came up with a modified package of narration. Karthik is a perfect gentleman who treats every women on the sets with dignity and it has been reflected well in the movie as well. I am so much happy that my mother-in-law Sujataa aunty has come forward to produce this film. Anand is a brother to me and has been a pillar to this film. Raashi Khanna is known for her beautiful looks, but she is far more beauty in her deeds and thoughts with good hearted nature. Sam CS has done an extraordinary work who worked day and night. (Jokingly) But I request him to stop playing PUBG as he has made me addicted to it as well. Being from the family of Editor, I always have a special affinity for Ruben and he has given perfect cuts. Every actor in the film have given an impeccable performance. I am glad to have worked with Sampath sir, who has shared lots of scripts with me. There is always a positive aura from Mime Gopi Anna throughout the shooting. Subbu Anna is a family to me. I have liked Azhagam Perumal sir as a director and now am happy to have seen him perform along with me. All the characters in the film have so much strength and we can keep releasing so many sneak peeks for every character. The film’s running length is just 2hrs 15mins but every character has equal importance. Beyond the comparison of good and bad film, I would claim ADANGAMARU to be an essential movie for the season.”

Actress Raashi Khanna said, “This is my second film in Tamil and I am really happy to be a part of this film. Everyone in the team treated me like their family member. I thought Ravi as an intense actor, but after I met him the myth was broken for
he was a jovial person making everyone laugh. Captain of the ship – Karthik was impressive while narrating the script. As an actress, I am always conscious about the substantial role and he has offered me one such character. I play the role of Anitha, a jovial and strong girl. I thank producer Sujataa Mam for treating me like her own Daughter.”

Producer Sujataa Vijayakumar said, “I was so much impressed and emotionally felt connected with the script as it involves an intense theme revolving around woman. Although I didn’t want to get involved in the film’s discussions, but Jayam Ravi would insist me to be a part of it. Karthik is so much dedicated that he doesn’t think about anything other than cinema. He had exerted his complete heart and soul into the movie that has given stupendous output.”

Director Karthik Thangavel said, “Jayam Ravi has been a great editor while narrating the script itself. I had to delete around 40 scenes as he told that so many violence wouldn’t be passed through censor. But at the same time, he didn’t leave me alone but kept suggesting me. Finally, he was happy about the good output as he believed the film has entertainment contents. Raashi Khanna is such a dedicated actress and she would be promptly be on sets even before the caravan would arrive. Her role is something close to her real life and she could feel the resemblance significantly. Suresh Chandra sir has been a good support to me from the days I worked with Ajith sir in Asal.”

Sam CS has done a remarkable work and Ruben has been a close friend to me for a very long time. Both of them have been good pillars to Adangamaru. I have been close friend to Lalgudi Ilayaraja from long time as we come from the same city of Trichy. He was so much supportive throughout the shooting. During the casting process, I had the help of casting director Nithya, who kept offering her immense support.

Actor Ponvannan said, “My friendship with Jayam Ravi extends for nearly 6 years. I have worked with him in films – Boologam, Bogan and few more. Although I have worked with many actors, I have very well known him personally. He has always been the director’s actor. Director Karthik has a good vision and the way he executes them through the actors and technicians are extraordinary.”

Actor Subbu Panchu said, “The title is so much coherent to the nature of Jayam Ravi. The film has entertainment, commercial and engaging elements. Initially, there were many choices for my role and finally it landed upon me. I have never seen Karthik lose his cool and he is a great talent.”

Actor Munishkanth said, “I am playing the role of a policeman that will have not an emotional shade as in Ratsasan. This will feature me in a routine Munishkanth role.”

Actor Sampath said, “I have known Karthik for a very long time as he was the associate director of Asal. He has been from the school of big names like Ameer. The reason why I like Jayam Ravi is his sense of humor, which I believe is an art that many wouldn’t possess. Adanga Maru is an emotional movie, where I got
to experience the intensity even before the BGM was scored. Sam CS has done a huge work for the film .”

Actor Azhagam Perumal said, “Karthik Thangavel has become a filmmaker after being trained by the eminent filmmakers like Ameer, Cheran and many such personalities. Jayam Ravi has a lovely charisma and he must take up more family stories. Adanga Maru is a film that deals the contemporary situation of how police station works. Sam CS is another eye in the film who had delivered a tremendous work. Raashi Khanna is someone who doesn’t have an tantrum on the sets and she gets her job done neatly.”

Actor Mime Gopi said, “This team comprises of a super team and everyone has done a marvelous job. The energy in the team is so much vibrant. Initially, I was invited to train few people for the movie, but then I got surprised after knowing that I am a part of this film. Karthik never loses his cool and remains so calm amidst tough situations. Adangamaru is a film that will be a milestone to everyone in the team.”

Actor Gajaraj said, “If Jayam Ravi sir is a part of the film, it will be definitely unique and have the success formula. I wish him and the team for entire success.”

Editor Ruben said, “Director Karthik had promised to give his first film to me and am happy it has happened now. Hailing from a family of Editor, Ravi sir has been so much supportive in enhancing my editing work. If the screenplay of this film is being appreciated, then all the credit goes to the entire team. I haven’t seen the final copy of this film and am curious to
see the movie in theaters. My baby in the home usually would relate everyone with a doll and Raashi Khanna is being called as Barbie girl. Jayam Ravi sir is responsible actor for his films always have something related to society. Every technician in the film have contributed towards the best output in the film. This will be an entertaining and emotional experience and prove to be a good family entertainer.”

National award winning Art Director Lalgudi N Ilayaraja said, “Whenever I mention the name ADANGA MARU, it gives me a feel of pride and am really elated to be a part of it. I have enjoyed so much working with Jayam Ravi.”

Music Director Sam CS said, “After working in Vikram Vedha, Adanga Maru is the film that gave me more opportunity to experiment with new things. The whole team shares a positive energy that helped me a lot over the nurturing this film. The screenplay in the second half will be more racier in the film and editor Ruben has given perfect cuts. I am thankful to all the producer Sujataa Mam for giving me an opportunity. When it comes to songs in Jayam Ravi movies, they eventually become hits and that’s for the face value of Jayam Ravi. I am too happy that O Saayali has turned to be good hit now. I am sure the background score of this film will be highly appreciated.”