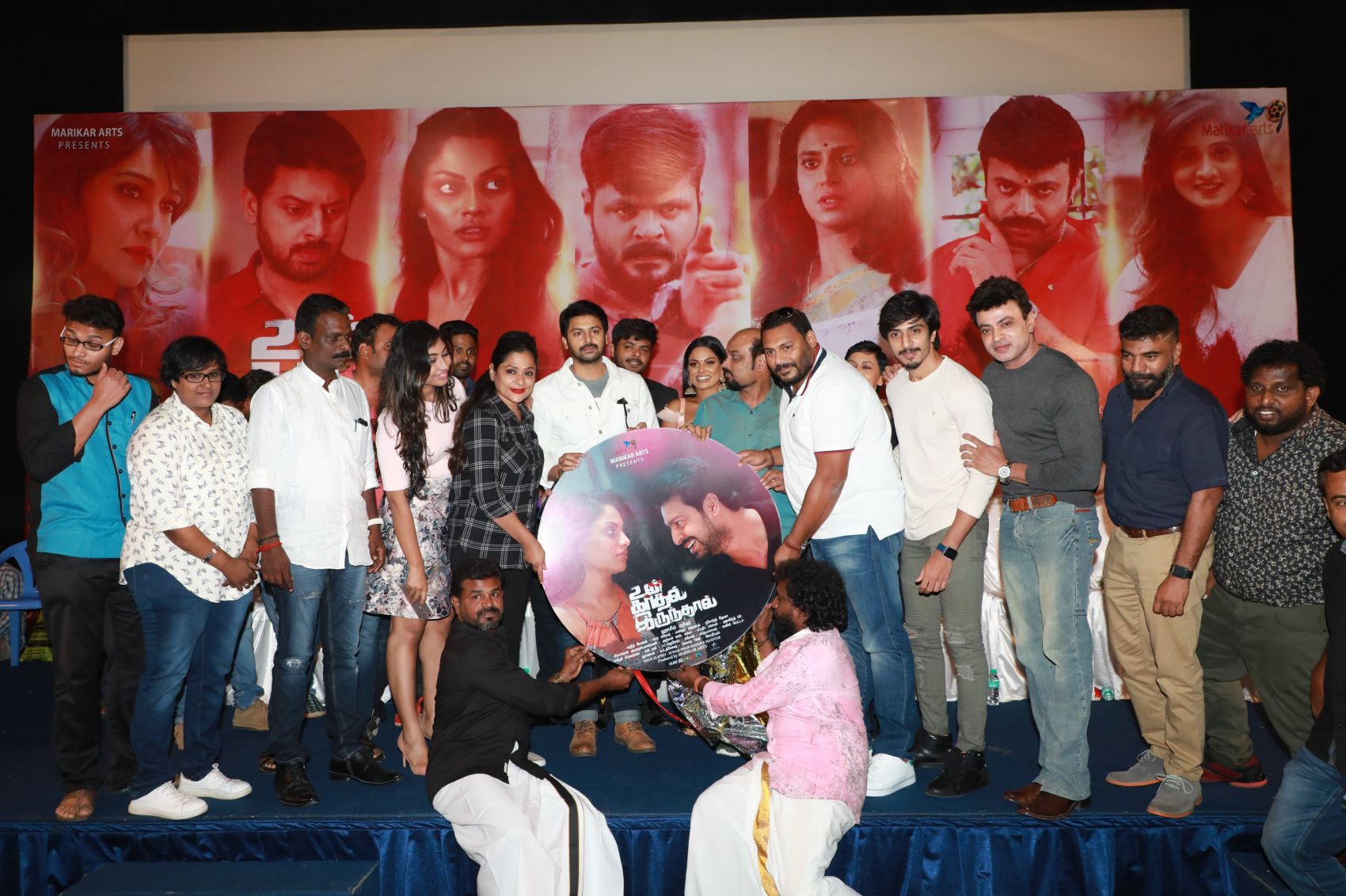 The audio launch of Haasim Marikkar directorial and production ‘Un Kadhal Irundhaal’ starring Srikanth and Chandrika in lead roles alongside Maqbool Salman was launched today. Here are some of the citations from the cast and crew along with chief guest who took part in this occasion.

Recently, I happened to watch the interview of Abhirami Ramanathan, where he told that ‘A good story’ is the base for the success of any movie. This film will have such traits to a greater magnitude. Only the title of this film will have something related to ‘Kadhal’, but it will be an edge-seated thriller with lots of unexpected twists and turns. Everyone other than Riyaz Khan will be villains in the movie. We have crafted a screenplay in such a way that it would be unpredictable from beginning till end. Many would ask me why I had to make a film in Tamil leaving behind Malayalam cinema. It’s all due to passion that I have here for good and exceptionally innovative contents are always welcomed here.

“I got onboard for this film only by the end. Haasim happens to be a good friend of mine. When he narrated me the script, I was pretty much impressed and told him that it would be really nice if what he wrote as script is made as a film. He hails from a family of huge film Production Company and expected him to be a producer as well. However, he surprised me by becoming a filmmaker; I also thought that he would make this film in Malayalam. But he has managed to make it bilingually in Tamil and Malayalam. He has given his heart and soul into the film’s nurturing and it will be a new of its kind psychological thriller, handling the screenplay in the best way.

I would also like to mention that this film will be completely different from what I had done earlier. Lena is a talented actress and have seen her versatile performance in other regional languages. I was wondering why she didn’t act in any Tamil movies after Anegan, but am happy that she will be sharing screen space with the talented actor like Vikram now. I am so happy to have acted with everyone in the team.

“My Tamil fluency is very little. I have acted in 15 Malayalam movies and am a hardcore fan of Tamil movies. It’s been a great dream for me to act like Mammootty and Dulquer Salmaan here in Tamil industry. I am so happy that my dream is getting fulfilled now through Asif. I think I have done my best acting in this movie, which marks my debut in Tamil cinema.”

“This is my third film as heroine, but it will not be a role something like my previous film ‘Iruttu Araiyil Murattu Kuthu’. I believe and keep my fingers crossed that audience will accept my performance.”

“I am happy to have acted in a good character role in this movie. Both Riyaz Khan and Mabool were a great support to me while shooting. Although, I didn’t get chance to share the screen space with Srikanth, his performance is really great in this movie.”

“While acting in any movies, we would ritually say that we have done something different. I have acted in around 150-160 films and most of them featured me in a cop role. But for the first time, I have done something really different. I thank filmmaker Haasim for offering me such a role, which is literally unexpected from my end. There are certain beliefs in the system of film industry, where the actors are often given a similar role. I thank the director for giving a different role. It’s been a nicest thing to work with this team. It’s not just me, but every actor in this film have done something different from their erstwhile movies. Actress Lena has done a wonderful job in this film and everyone will appreciate her for this act.”

There is no barriers involving language in cinema. Be it Tamil, Hindi or Malayalam, Music has no such restrictions. Although my fluency in Tamil is very less, I have tried giving my best into the musical score. I am so happy that Haasim gave an opportunity to work in this film.

I am really happy to see that Haasim Marikkar has made a bilingual film in Malayalam and Tamil. It’s exciting to see the sons of Mammootty sir and his younger brother’s son to make their presence in film industry. In the same manner, I would like to see the same thing happens in all the industries including agriculture. I have acted along with Mammootty in 3 movies and all of them crossed 100 days.
Cinema is beyond language, grammar and boundaries. But it’s little disappointing to see that few movies are producing at a whopping budget over a long span of period. Disappointingly, they have failed to make a good impression in box office, which includes the recent release. Also, it is so much distressing to see that the tickets for early morning shows are being sold at 1000rs and 500rs. Why can’t they sell the tickets at the rates fixed by Government? I will never leave those miscreants looting away money illegally from poor and unprivileged people. In the same way, online ticketing shouldn’t have more than 10rs as the transaction fee. Today, TASMAC has become a mandatory source for Government for monetizing. Will anyone pay Rs.200 for an alcohol that has a MRP of 115Rs. Wouldn’t you all create a hassle and protest for this? Then why that is nobody creates an issue and stand up for what is right involving the illegally hiked cinema tickets. Top actors like Rajinikanth, Kamal Haasan, Vijay, Vishal and others should make sure that it doesn’t happen.”

By the end of show, director-producer Haasim Marikar of ‘Un Kadhal Irundhaal’ revealed the title of his next film 4K – Kanavil Kanda Kadhal Kavidhai.