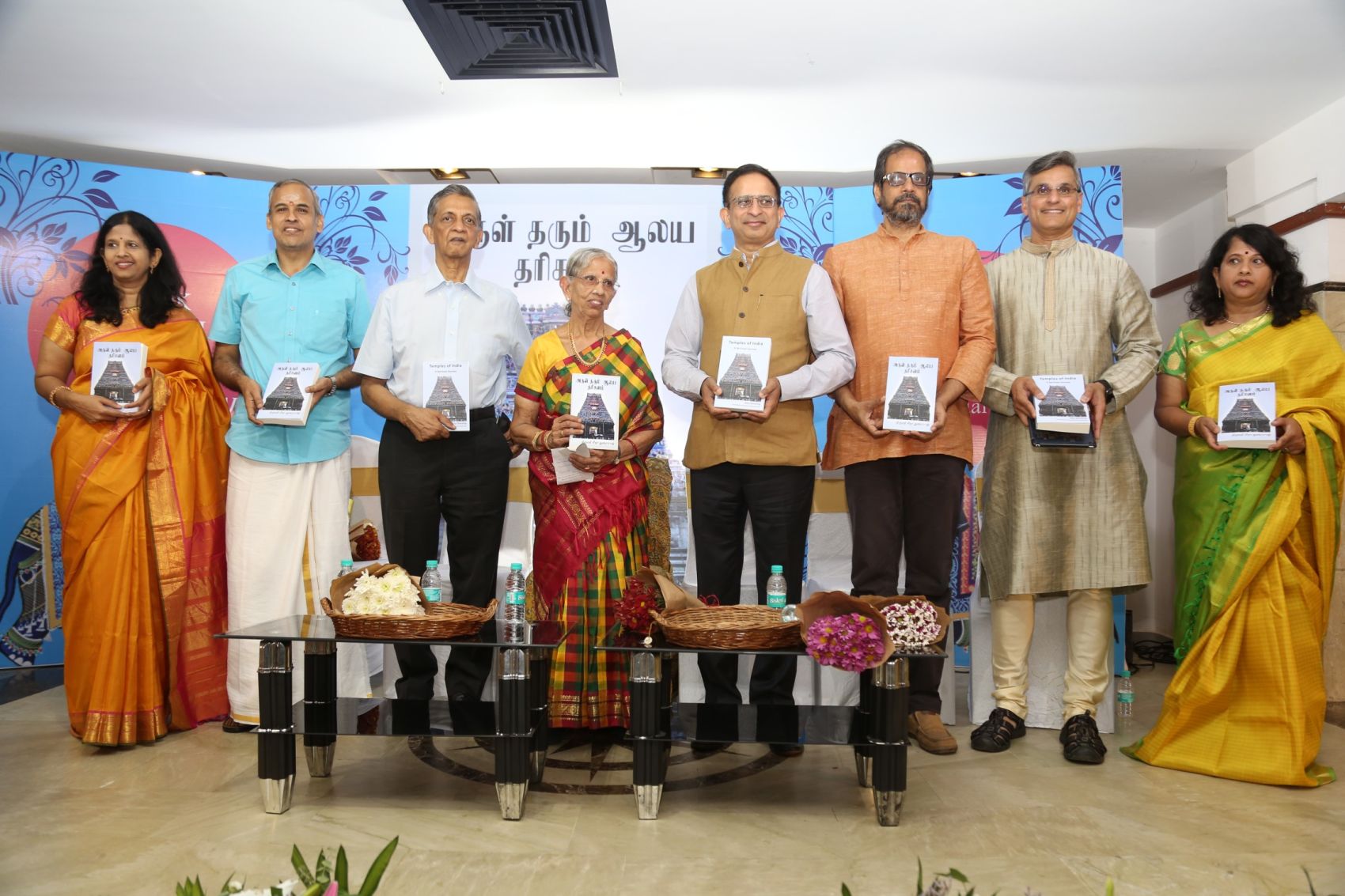 Mrs. Usha Sivaskandan & Mrs. Jayashree Pasupathy in association with Halant Books hosted the launch of “Arul Tharum Aalaya Tharisanam”and “Temples of India:A spiritual journey”in Tamil and English respectively. The book revealsmany stunningly attractive temples in India, aims to encourage many devotees to patronize these temples so they can flourish for future generations.

The book talks about an intriguing story of India’s temples such as its history, legend, architecture and significance.

Commenting on the launch, Smt. Sita Dorairaj, said, “I take this opportunity to thank Mr. Sundar Krishnamurthy and Mrs. Rekha Krishnamurthy from California for their immense support towards translating and editing the content of Arul Tharum Aalaya Tharisanam into Temples of India: A Spiritual Journey. Without their support, this launch wouldn’t have been possible”.

She added, “I am blessed to have such wonderful daughters, Usha and Jayashree, for being the pillars of strength throughout this journey, especially managing the entire initiative, thereby fulfillingtheir beloved brother’s last wish. Special thanks to the publisher, Mr. Sridhar Akruti of Halant Books for hisunparalleled support in publishing my book”.

Sita Dorairaj was born in Needamangalam, Thiruvarur district in Tamil Nadu. She was born to Late. Smt. Saraswati and Sri. Ganesan. Her father was a landlord. She has four sisters and three brothers,two of whom have passed away. She was excellent in academics and extra-curricular activities. Her main interests include singing and composing classical music, poetry, making flower garlands, drawing kolam (rangoli) etc.

In 1957, she married Sri. Dorairaj and moved to Tiruchirappalli. They had three children, her son Balan, followed by her daughter Usha, and her youngest daughter Jayashree. Later, she developed a passion forvisiting temples and started compiling information about temples over a period of 30 years. She has visited over 68 of the 101 temples with her husband and wrote about them since 2003 in a North American Tamil magazine called Thendral. She has been traveling to the U.S. for over 25 years and currently residing in San Jose, California.

She lost her husband in 2015, followed by her son the year after,due to a massive heart attack. Shortly before he died, her son asked her to publish her writingin India as a book so that everyone who reads it will be educated and blessed.

Following the untimely death of her son, she channelled her immense grief and loss into fulfilling her son’s last wish of a book about the temples of India. With the strong support of her daughters, Usha Sivaskandan and Jayashree Pasupathy, publisher Sridhar Akruti, translator Sundar Krishnamurthy and editor Rekha Krishnamurthy,she managed to complete the project in less than two years.

She dedicates this book to her late husband and late son. Through this book, she would like to create an awareness amongst the readers and encourage them to visit less known temples.

Mrs. Sita Dorairaj was born in Needamangalam near Kasi Viswanathar Temple, Thiruvarur district in Tamil Nadu. She grew with the resonant rings of the temple bells, sweet music of the nadhaswaram and the divine words of the vedas. As a child, she was fortunate to be surrounded by music during her early years with her father and aunt’s interest in music and singing. At the age of 5, she started learning Carnatic music and tuned towards singing around the house as she was not allowed to sing or perform in public in those days. Also, writing songs to various ragas, writing poetry etc. Simultaneously, she developed a deep love for and interest in visiting temples. Her mother also taught her how to make flower garlands and draw kolam (rangoli) at the temples. Gradually, she started learning more about temples and writing about them. She also has keen interest in reading travelogues.

Mrs. Dorairaj’s first article about a temple was published in a Tamil magazine called Aanmigam. Her first publication, Thendral, a Tamil magazine published in North America, was a poem she wrote about the magazine and its contribution to its readers. Beginning 2003, she has been writing about Temples of India in the religion section of Thendral magazine. She and her husband visited over 68 of the 101 temples covered in this book.She lost her husband in 2015 followed by her son in 2016. She would like to dedicate this book in the memory of her beloved husband and son.