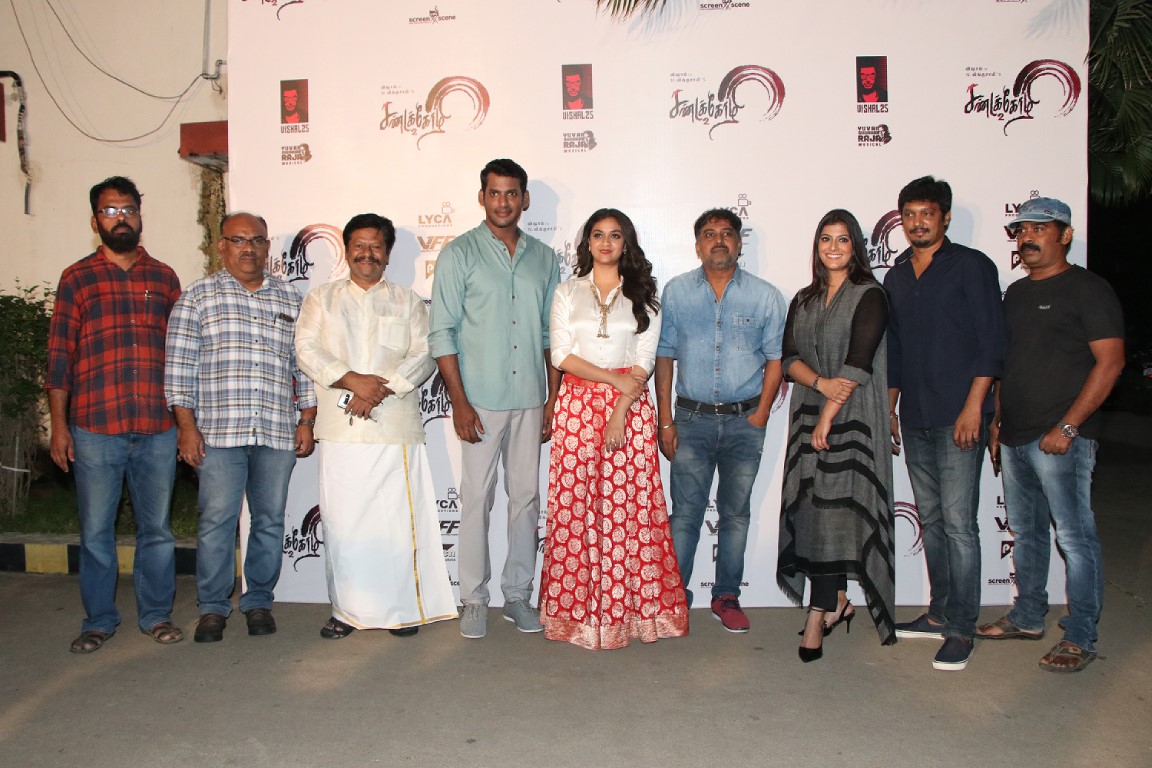 The celebrations are already on its grandest spell with the entire team of Sandakozhi 2 looking so much sure-footed of scoring the brownie points with the film. Of course, the success of first part has yielded the finest platform raising the bars of expectations. Here are some of the excerpts from the Sandakozhi 2 Pre-Release Event that was held this evening (October 13) in Chennai.

Actor Vishal said, “To complete such a huge
film within short span of time is not possible without the team support. Especially, the final
Phase of 45 days was really tougher. As a producer, I wanted to bring back myself as hero and that was the reason behind launching VFF. We wanted to complete the shoot earlier and get the movie released for April 14. But due to sudden migraine pain, I couldn’t make it happen and I really thank the entire team for being so much helpful and supportive. Now I am happy that Sandakozhi 2 is getting released on the auspicious occasion of Aayutha pooja. Whenever I touch Raj Kiran sir, I get so much positive energy. When it comes to Keerthi Suresh, we are all waiting to see her hold National awards for Savithri. She has done a fabulous job as Sembaruthi. With Varalaxmi, when she was suggested for the baddie role, it was a tremendous idea. Everyone will be spellbound over the final moments of the film for her overpowering performance during final 8 minutes. I thank my brother Yuvan brother for giving a great music.”

Actor Raj Kiran said, “Many over here have been taking about the film’s success and I am sure it will be no different from what they have claimed. This is so much illustrious due to the hard work of entire team from director to light department. Lingusamy and his entire have done such a colossal job as every scene would involve at least 500-1000 junior artists. Vishal has invested a huge money into the film and his dedication for shaping up the entire movie with grandeur will be so much noticeable. Everyone are ennobling Varalaxmi as villain. But I would say that there is no hero or villain in the movie. By the end of film, everyone will be so much spellbound over the role. I used to tell Lingusamy to maintain a low profile and underplay throughout as creating over expectations for the film will give disappoints. But I believe audience will celebrate the film.”

Director Lingusamy said, “Hard work will pay off well with good results. In this film, the team has given a good energy to the me. Initially, I wanted to avoid speaking about the film, but the beauty of this team has to be emphasised. There is something beyond hard work, the good flow of positive energies can be created but it will be happening on its own. Such happens to be the situation of Sandakozhi 2. Initially, we wanted to have PC Sriram sir followed by Ravi Varman and Ramji to handle camera. But Sakthi has done a wonderful work on par with their standard. For the first time, I am working with editor Praveen and he has a contributed a lot to the film’s best output. Anl Arasu and Anbariv masters have done a stunning action choreography. Varalaxmi has done sincere and honest job. When working in Sandakozhi, I used to tell Meera Jasmine that she will reach the great heights like Savithri amma and I have got real Savithri in second part. Within short span of time, Keerthi Suresh has achieved so much. Vishal has worked in 25 films and he has reached a greater height for his hard work and good heart.

Actress Keerthi Suresh said, “Like everyone says I was completely reluctant to reprise the role of Meera Jasmine. But when I heard the script and the depth of my character as narrated by Lingusamy sir, I was brimmed with good confidence. Varalaxmi has done an outstanding job and I am really scared looking at her performance in the movie. There is a particular scene of me and Raj Kiran sir which has come out really well. Cinematographer Sakthi has given nicest visuals. Vishal has become my close friend and he took care of me as a producer and director.”

Actress Varalaxmi said, “First, I would like to appreciate cinematographer Sakthi for capturing everyone with beautiful visuals. It’s going to be a breakthrough for him. Yuvan has done a fabulous job and it’s definitely his comeback as everyone says. Keerthy Suresh has done a pretty good job. I would like to thank Vishal as a producer and actor. There were few scenes where Lingusamy sir would get angry as myself and Vishal will laugh out in many scenes. It was such a great experience working with Vishal as whole.”

Cinematographer Sakthi said, “This film will always be special to me as it holds lots of good memories. I worked as assistant cinematographer Jeeva sir in first part and now to be handling camera for sequel is a real big happiness. Vishal sir kept supporting me in all aspects of production.”

Screenwriter S Ramakrishnan said, “The films that stay close to the realistic themes are always received well among the audience. This was the reason behind the success of Sandakozhi and here in this sequel, it will be embellished yet again. The film has come out really well with all the ingredients that will cater the tastes of universal audiences.”

Actor Munishkanth said, “I have been completely spellbound over the nature of Vishal as he remains cool all the time. When we all go to village for shoot, we will get good welcome by people there. But it is always special for Raj Kiran as they treat them as their village head. Such happens to be his charisma.”