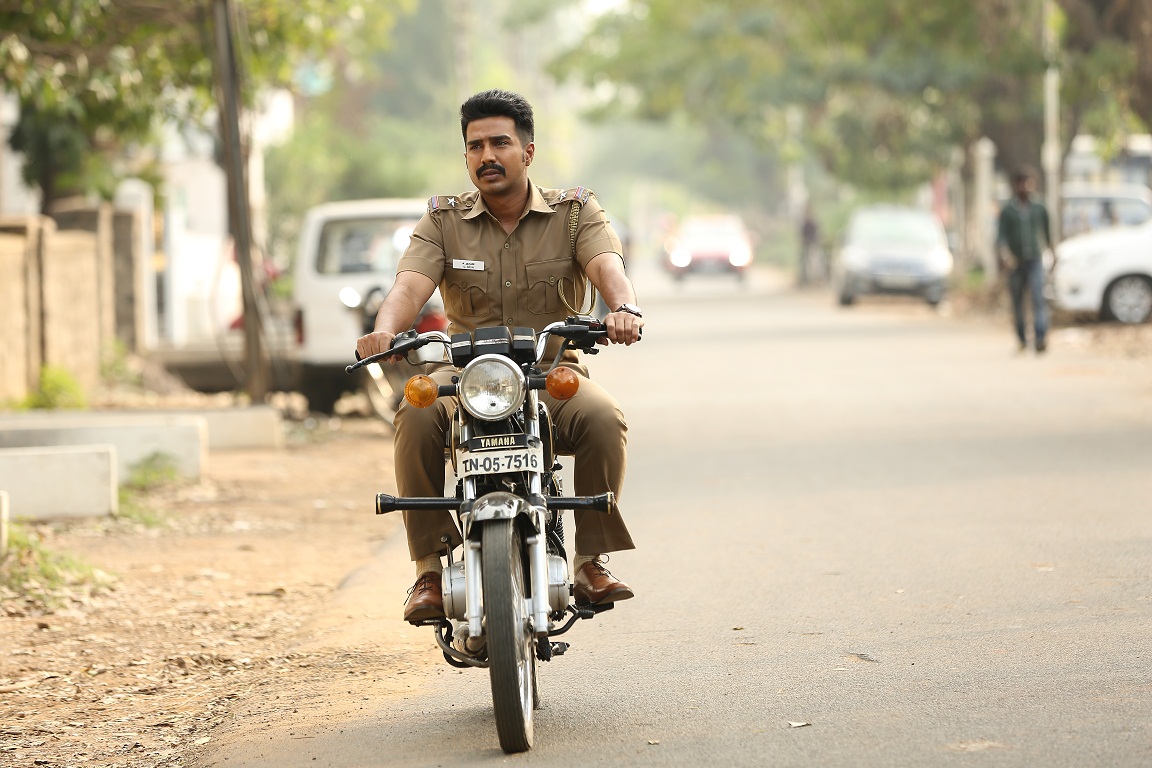 Vishnu Vishal all set to walk in to the big bracket.Vishnu Vishal who had been in the safe horizon as a hero who guarantee the minimum is stepping into the bigger horizon of a star. “He has the promise, potentiality and the grit to make it big, there is a new space open for an action hero and iam confident that Vishnu Vishal with the sheer talent of his will walk into the zone of glory” says Producer Dilli Babu of Axess films.

Actor Vishnu Vishal has lots to share about his much awaited ‘Raatchasan’ scheduled for worldwide release on October 5. Significantly, it’s an imposed ‘Tightlipped’ moment as the actor plays it safe for unveiling even a bit beyond certain words will turn out to be a spoiler for audience.

“I play someone, who is not at all interested in becoming a cop, but eventually lands up with the job. I must say that the experience was completely different and new for I hadn’t got an opportunity to wear a cop uniform before in any movies,” says Vishnu Vishal as he is seen brimmed up with immense exhilarations. Well, this shouldn’t be predominantly a mere reason that attracted him towards Raatchasan.

So what actually incited his interest towards the film? “It’s definitely, a surprisal approach by filmmaker Ramkumar, from whom, none would have expected a paradigm shift. While his directorial debut ‘Mundasupatti’ was overwhelmingly hilarious film, I was transfixed to hear Ramkumar narrate a script of mystery and suspense with unlimited Goosebumps. It’s completely an output of his 2-yr hard work, which I believe everyone will surely appreciate,” acclaims Vishnu as he extends his praises upon Ramkumar.

The trailer and other visual promos have instigated an urge of inquisitiveness to know if Raatchasan is a horror flick. Especially, to find a horripilating doll that springs up an instant reflex, Vishnu just clarifies it saying, “It’s a pure psychological thriller with mystery and suspense. Yes, the ‘Doll’ that we saw in visual promos has become a strongest attraction. All that I can assure for now is that this element has something to do with the story.”

Sharing about his co-star Amala Paul, Vishnu says, “The female lead character is sketched with so much of powerful substantiality, which demanded for a matured actor. We found completely justified that Amala Paul would be able to carry off the role with perfection. The way Amala Paul has been attempting with different genres and roles in the recent times made us affirmed that she will nail it hands down. Apparently, to see her performance on final output, her performance has turned to be incredibly brilliant,” says Vishnu Vishal. Furthermore, he adds that there are only 5 major characters in the film, which will travel throughout the course. “Well, if everyone were hit by the witticism of Munishkanth and Kaali Venkat in Mundasupatti, you will find them in uttermost seriousness in Raatchasan,” winds up Vishnu.

Raatchasan is produced by G. Dilli Babu for Axess Film Factory in association with R. Sridhar of Skylark Entertainment, this much expected film is released by Ravindran.R of Trident Arts. Ghibran’s musical album comprising of four songs have become an instant hit and visuals by Cinematographer P.V. Shankar are already regarded highly in appreciations.