Jackiecinemas
Home Cinema News 360 We Are Proud To Say That Sandakozhi Franchise Is Like God Father... 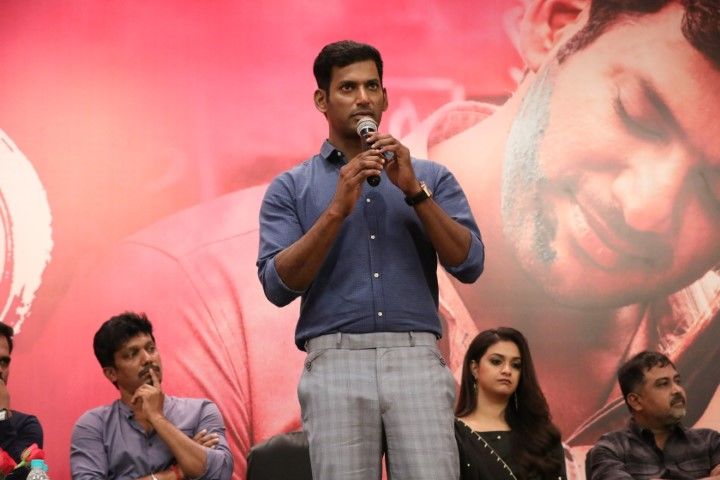 The audio launch of Vishal-Keerthy Suresh starrer Sandakozhi 2 has become a sensational celebration in town now. The entire team was present for the media interaction session and here are some of the excerpts.

Sharing his experience working with Lingusamy, Vishal said, “My relationship with Lingusamy goes back to our days of Sandakozhi. When the script was completed, I was quite reluctant whether Lingusamy would accept me as a hero since he had written the script keeping Suriya in mind. It was a crucial time, where my debut film Chellamey wasn’t even released. But he was generous enough to trust and banks his hope on me. I trusted more on this ‘Saamy’ (Lingusamy) than ‘Saamy’ (God) in my Prayer room. Now having worked with him in Sandakozhi 2, we are proud to say that Sandakozhi franchise is like God Father. This is because, when we worked in Sandakozhi 2, we were reminded of beautiful memories in our first part. So I’m sure, if there is a third part, we will have more memories to cherish about. If this film turns to be a huge success, myself and Keerthy Suresh will definitely stand at the footsteps of Lingusamy’s office. On the other hand, the second part has so much substantiality that it can pave way for the premise of third instalment as well.”

When many wondered why Vishal didn’t open up on Varalaxmi Sarathkumar, he said, “Even a couple of lines about either her performance or role would turn out to be a spoiler. So Lingusamy and I decided to remain tightlipped about her.. I am sure when audiences walk out of theatres post-show, all characters including me might get faded, but Varalaxmi will be retained in their minds.”

Moviemaker Lingusamy said, “In one of the recent occasions, I had openly admitted that there is not even a single difference and change in Vishal’s physique from first part to the new one. The gap might look like 13 years between both these movies, but according to me, it’s just 13 days. But when it comes to the progress and development of Vishal, it is definitely 13 years. He has expanded his brilliance and stability to a greater extent. Today, I feel so much proud to see him involved in various activities. Moreover, with so many responsibilities, the way he handled things with coolness made me completely awestricken. More than all, his greatest gesture of not letting me go into any kind of pressures during the shoot makes me feel more emotional.”

Actress Keerthy Suresh said, “First and foremost, I would claim Sandakozhi 2 to be a stress buster for me personally. It was during the same time, I had to shoot for the film ‘Nadigaiyar Thilagam’, where I felt completely inclined to pressures. But when I stepped into the shooting spot of Sandakozhi 2, things were completely easy. I could feel myself rejuvenated working with this time. My heartiest thanks goes to Lingusamy sir for giving me a great opportunity to work in this franchise, which already had an iconic actress like Meera Jasmine. I would gladly mention that Sandakozhi 2 will remain to be my favourite film after Nadigaiyar Thilagam forever.”