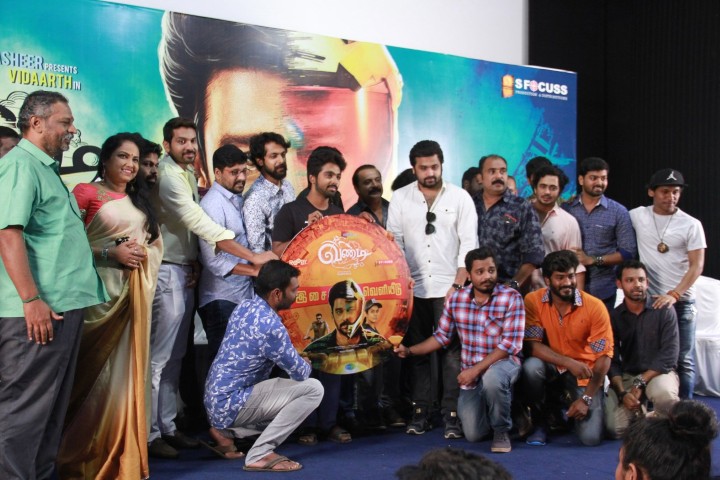 Impressing audience with the unique title and a complete innovative impact through the posters, the audio launch of VANDI happened in the presence of team and some prominent filmmakers of the contemporary season including GV Prakash, Aadhik Ravichandran and others. Couple of songs along with the theatrical trailer were screened for the special invitees.

Producer Hasheer of Rooby Films – “I have always had a great attraction and fascination towards Tamil Nadu and Tamil culture from a very long time. When I listened to the script of Vandi, I could sense the Tamil culture prevailing throughout the film. When we were discussing the script, both myself and Director Rajeesh had a strong desire to bring in actors to exert naturalistic performance. Even while having junior artists, we wanted the people from the surrounding locales of shooting spot to be a part of the movie. I have a huge dream of being a Tamilian from Kerala and it’s based on the results of Vandi…”

Actor Vidaarth who played the lead role in this film addressed the special invitees and media channels said, “In many occasions I have come across contradictory statements involving media reviews and box office results. When my Oru Kidaiyin Karunai Manu has positive reviews from media, I boasted of it to a producer and he said, “Then the life of
Movie is done.” But now I am happy to see that with strong media reviews, Vijay Sethupthi’s MERKU THODARCHI MALAI is farin well for the third week. I wanted to register the power of media at the right moment and it has occurred now. Getting on with my film VANDI, it came across some issues and only due to the strong support of PL Thenappan sir, we were able to have a sigh of relief. It’s not the fact that S Focuss Saravanan took over the project that we all belong to the same native place. They saw the film and they proceeded clasping it after they liked the final project. Director Rajeesh might look and simple over here, but he is such a huge task master, where he would make through painstaking efforts even for the minute reactions.”

Vidaarth continued to add up some humorous essence by apologising the directors of Maraindhu Irundhu Paarkum Marmam Enna and Adangathey directors was missing their scripts and will definitely work with them now. He went forward to Adhik Ravichandran saying that he is open to his kind of movies too.

Producer PL Thenappan said, “When Vidaarth is taking up a project, it can be assured that it would have a different and unique script. I am sure Vandi will prove of such instance again.”

Rishal Jeyni, Editor of this film said, “Anyone can get a hit movie, but very rarely we do have films to experiment. Especially for an editor like me to have such a movie like Vandi that has more scope for editors, it was a blissful experience.”

Music director turned actor GV Prakash said, “This Vandi will have a superb run for everyone in the team. I wish everyone to have a great success through this film.”

Actor Vijith said, “We had recently watched the film and everyone loved the way it has come out very well than the scripted version. Vandi will be a hyperlink story of three parallel tracks based on three different premises connected through a bike that we all saw in the trailer. I am hoping that media and audience will support us for the film’s success.”

Actor Ravi who has played the heroine’s father in Vandi, “I have played an important role in this film and would say every role will have the prominence throughout the tale. Especially, the film’s climax will have more impact, which we experienced in the shooting as well.”

Actor Sriram said, “When couple of my movies had a middling run and I was confused about my next choice, Vandi came my way and this has been a real big opportunity for me. Director Rajeesh is someone, who never carries script papers to the shooting spot, for he possesses such a memory power and strong planning. Yet another person in the film who deserves special mention is editor— who had a tough phase for nearly 3 months. It’s very hard and difficult to edit a film like Vandi and he has done a commendable job.”

Rajesh Narayanan, Cinematographer of this film said, “This is my first film in Tamil and I thank everyone in the team for giving me an opportunity. I wish the entire team for a good success of Vandi.”

Music Director Sooraj said, “Chennai is always a lucky song for me as it has been evident from my childhood. My first Tamil independent was Sita Kalyanam from SOLO had a wonderful reception that I never expected. Working in Vandi was an experience of blessing. With most of the team members being from Kerala, it was an overall beautiful experience.”

Actor Aruldoss who has essayed an important role in the film said, “Every aspect of filmmaking in Vandi was a different experience to me when compared to other movies I have worked. Director Rajeesh Bala owns a unique style that was blatantly evident and am sure he will have big receptions out here in Tamil industry. Producer Hasheer has lavishly spent more budget into the movie. Actor Vidaarth owns so much of naturalistic appeal that instantly impresses audiences.”

Director Adhik Ravichandran said, “Everyone says that Vidaarth is a great naturalistic actor, but what I see in him is that he is a great fighter. Everyone in the team have done a hard work, which is so much illustrious with the trailer and other promos. I am sure as producers requested, Tamil audiences will definitely make them winners through this film Vandi and many more movies to come.”

Actor John Vijay said, “The film itself was an amazing experience. I always try to showcase some difference in looks from one film to the other. Over here, Rajeesh has showcased the same elements not only to me, but to everyone in the movie. I have done so much of cop roles and would say this is the best one.”

S Focuss Production and Distributors Saravanan said, “Myself and Vidaarth belong to the same native place. What I love about Vidaarth Anna is that he is so much friendly and grounded in nature. What I like about John Vijay sir is that he treats every film as his own.”

Director Rajeesh said, “Initially, I wanted to make this film in Tamil, but started writing the script keeping this regional backdrops in the mind. I am really happy to have a producer like Hasheer. We had to come across lots of problems, but he stood by us in every challenge and made us overcome it. After completing the script works, it was all about getting right actors. I must really admit that I needn’t boast about Vidaarth for everyone over here knows about him. He is so simple and acts only when camera is switched on while rest of the time he is true and natural in his deeds.”