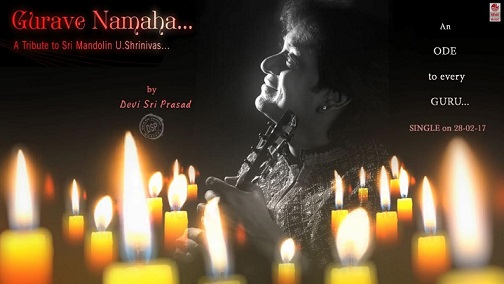 Music director Devi Sri Prasad is all set to pay tribute to his guru Mandolin Shrinivas in a grand manner this year.
DSP is going to launch a Song called “GURAVE NAMAHA” as a tribute to Sri Mandolin Shrinivas.
DSP himself has conceptualised, composed n sung the song and also played Mandolin for which the lyrics were written by Sri Jonnavitthula garu in SANSKRIT..
In connection with this DSP says
“The Greatness of a GURU cannot be expressed in words..
So I tried to express it through MUSIC !!
I composed this song in KEERAVANI RAAGA , one of the most favourite raagas of my GURU Sri MANDOLIN SHRINIVAS ANNA..
I made the concept in such a way that
Each of the 7 notes explains one unequalable Divine quality of My GURU..
I wanted this song to be in SANSKRIT to make it more Musical and Universal as my GURU has fans all over the World !!
So I approached Sri Jonnavitthula garu with the concept and he immediately accepted my request and wrote the most Beautiful lyrics for this song !!
I also got a MUSIC VIDEO made for this song with rare and beautiful performance clips of Shrinivas Anna.. And I would like to thank each and every fan of his who helped us in collecting this footage from various parts of the World !!
My wish is to reach this song to millions of ANNA’s fans who worship him as GOD , as this song is about his LEGACY and also the greatness of a GURU..
We are releasing this song on Mandolin Shrinivas Anna’s Birth Anniversary on 28th FEB through LAHARI MUSIC..
This song is dedicated to every great GURU who brings Meaning to our Lives !!”
On the same day , as every year Mandolin Rajesh (Brother of Mandolin Shrinivas) and DSP along with SS INTERNATIONAL LIVE are organising a TRIBUTE CONCERT for SRI MANDOLIN SHRINIVAS called “THE GREAT MANdolin” featuring Legendary Musicians like USTAD AMJAD ALI KHAN, DRUMS SIVAMANI, MANDOLIN U RAJESH and many more Amazing artistes..DSP is also performing along with them..
Shrinivas, who passed away in 2014, was a child prodigy himself and he brought in his own style of performing music on the mandolin. It was he who introduced DSP to mandolin at a very young age, and impressed with the young boy’s potential, Shrinivas wanted DSP to become a mandolin player like him. Over the years, after turning music director in film industry, DSP had made his admiration towards his guru quite evident. And the music video that he’s going to release on Shrinivas’ birth anniversary is going to be a befitting tribute to his guru.