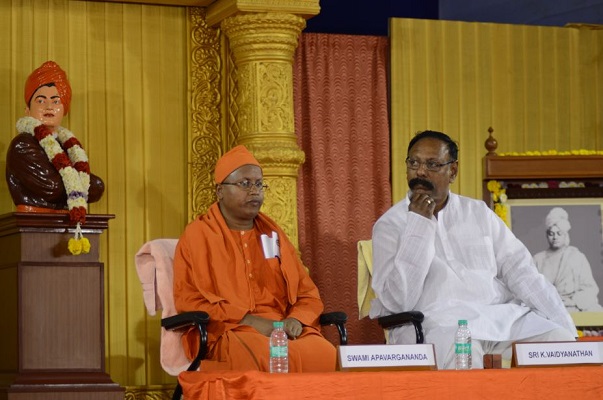 The fourth day of Vivekananda Navaratri program started with the Bhajan by Ramakrishna Math devotees. It was followed by the reading form Swami Vivekananda’s lectures by Bramachari AdiChaitanya.

Swami Apavargananda, Editor, Sri Ramakrishna Vijayam, spoke about the Chennai disciples of Swami Vivekananda. He explained on how they, in Swamiji’s first visit identified his greatness and made arrangements for his participation in the Parliament of religions of Chicago.

Even when Swamiji was in the West, these young men untiringly looked after his financial needs. They carried out his orders such as starting of magazines like Bhramavadin, Prabuddha Bharata, etc. On his return they gave him a unprecedented reception. So Madras disciples have a very significant place in the Biography of Swamiji and in the spiritual history of India.

K Vaidayanathan, Editor, Dinamani participated as the Chief guest of the event. He spoke: “We are celebrating the Vivekananda Navaratri in the same sacred place where Swamiji stayed for 9 days.

‘Fear not!’ – this voice of Swamiji was heard by everyone who enters this complex.

I think publishing the events connected to Swamiji and his messages are sacred duties that I am able to do.
Nanjunda Rao one day found a picture lying on the floor of Thesophical society. There was a man sweeping the floor. Rao was so much attracted and inspired by seeing the photo that he took it to his home and placed it in his Pooja room. After a very long time, he got acquainted with Swamiji. Once Swamiji happened to visit his home. Seeing the picture, Swamiji’s eyes were welled with tears. Everybody wondered why Swamiji was crying. Nanjunda Rao told the history of how the picture landed in his home. Then Swamiji revealed that it was the picture of his own dear Master – Guru – Bhagwan Sri Ramakrishna. Yes, Sri Ramakrishna without anybody’s knowledge came and accepted the Pooja of Rao. So this place is one of the most sacred places.

It is our great misfortune that the letter correspondences between Kidi and Swami Vivekananda is not saved anywhere. It would have been a great treasure.

Sri Vaidayanathan recounted the anecdotes of many devotees of Swamij and his disciples very interestingly. He exclaimed: When I encounter any problem in my life I find the solution in Sri Ramakrishna’s words.
Sikkil Gurucharan along with Anil Srinivasan (in Paino) gave a scintillating Carnatic – Western fusion musical performance. He started with the famous “Vellai Kamalathile” song written by mahakavi Bharathiyar. Next came up Papanasam Sivan’s composition “Naan our villayattu Bommaya”. It is quite fitting that this wonderful performance was given in a place where great saints who built the bridge between East and West stayed and sanctified for nine days.

The Divine book fair was visited by more than 500 children in the evening. Monks of the order gave motivational lectures on the lines of Swamiji’s thought. Navaratri event in the evening was attended by 300 people.