Jackiecinemas
Home Tamil Cinema News The doors of SBKT has opened to more than 3 Million people! 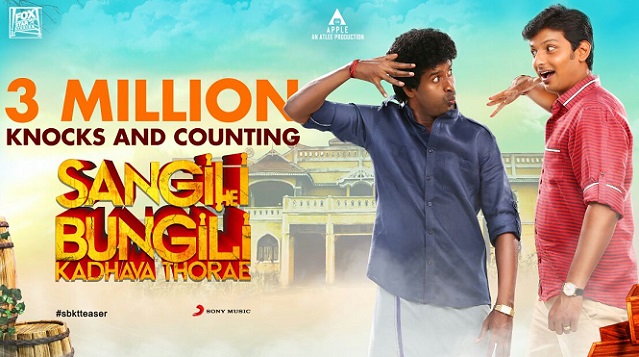 The two doors of ‘SANGILI BUNGILI KADHAVA THORAE’ is perfectly carved with two genres – Horror and Comedy, which has been now witnessed by more than 3 million viewers on Facebook (2 million+) & Youtube (1 million +). The 46 seconds teaser of SBKT that was released on 4th February is creating magical waves on Social Media. Its breaking records in no time, being the fastest ever for any Tamil horror film and the second highest of all time in this genre. It’s also the highest ever for any Jiiva film.

With the tremendous response from Audiences and Cinema Lovers, it can be clearly said that SBKT, starring Jiiva and Sridivya in the lead roles has opened its doors that leads to success. Produced by Fox Star Studios and Atlee under the banner ‘A for Apple’, this most expected film has been directed by debutante Ike.