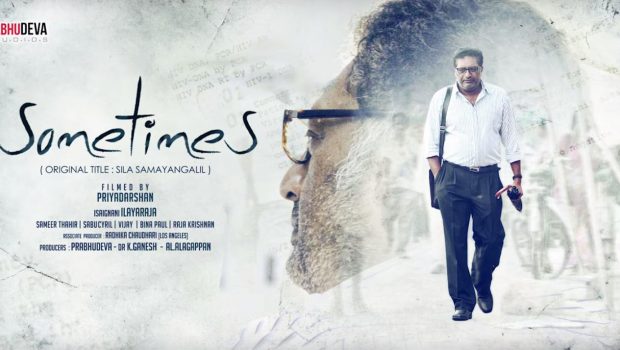 ‘Sila Samayangalil’, directed by Priyadarshan has bagged 3 awards at the ‘Jaipur International Film Festival and one jury award in Chennai International Film Festival. ‘Sometimes’ (SILA SAMAYANGALIL) life path may take a different track which could change the entire life in very few seconds. ‘SILA SAMYANGALIL’, directed by Priyadarshan and Produced by Prabhudeva – Dr.K Ganesh under the banner ‘Prabhudeva Studios’ and Director Vijay under the banner ‘Think Big Studios’ has now bagged three prestigious awards at the Jaipur International Film Festival. ‘Sila Samayangalil’ has Prakash Raj, Nasser, Sriya Reddy, Ashok Selvan in the lead and Varun, Shanmugarajan in the pivotal roles and is slated for an early February release.

“Being awarded for a film is an honour. It is an accreditation to the sustained efforts, passion and commitment. The amalgamation of the best of the talent combined with belief on our respective works gives us this honour. In Jaipur film festival, under Feature film categories, our ‘SILA SAMAYANGALIL’ has won the ‘Green Rose Award’ and In ‘Yellow Rose Award’. And also, we are very much glad to bag the award for ‘Best film from Asian continent’ category. Apart from Jaipur film festival, SILA SAMAYANGALIL has bagged the Jury award for best film in Chennai International Film festival too.

I would like to thank and dedicate these awards to Maestro – Ilayaraja, the composer of our Sila Samayangalil, DOP Sameer Thahir, Art Director Sabu Cyril, Editor Beena Paul, Dialogue writer Vijay (Director) and my entire crew for acting as the strong GB backbone for SILA SAMAYANGALI” conveys Director Priyadarshan enthusiastically.