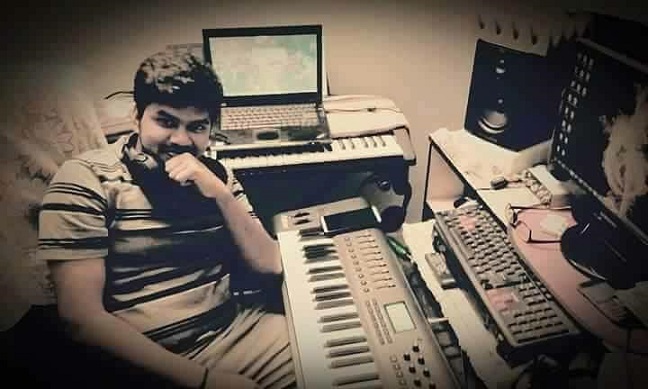 ‘Everything goes right’ is a positive thinking and with the same thought, debutante Music Director Naren Balakumar has stepped into Tamil Film Industry by the upcoming  dark – comical – crime – thriller film ‘Thappu Thanda’. Directed by Veteran Filmmaker Balumahendra’s assistant Srikantan, the film ‘Thappu Thanda’ is produced by Sathyamurthi under the banner ‘Clapboard Production’. The single track ‘Duplikka Domaari’ composed by Music Director Naren Balakumar, a specialist in Hindustani and Western Classical has crossed over 1.2 Million views on Youtube, which is considered to be a great welcome to a debutante Music Director. Apart from ‘Chennai Super Kingz Anthem’, ‘Thalaivanuku Oru Paatu’ (A tribute to Superstar Rajini on his birthday), his works in award winning short films like ‘Ray’, ‘Moribund’, ‘Oomai’ are also much appreciated, especially for the background scores.
“First of all I would like to thank the Audience for the 1.2 M views for our Duplikka Domaari song. We have got five songs and one theme track in Thappu Thanda film, for which we have mostly used live instruments. I must say that our singers Chinmayi, Abhay, Alphonse Joseph, Harihara Sudhan, Hyde Karty and Gaana Vinoth has added new colors to the songs. The mastering process of all the six tracks in ‘Thappu Thanda’ took place at New Edge Studios – Mumbai, which has been monitored by renowned Sound Engineer Shadab Rayeen. Now, under the control of Audiographer Thappas Nayek, we are in the DTS process for our BGMs and very soon it will be a wrap for back ground scores. The audio will be released shortly and I am sure that the audience will connect themselves with Thappu thanda on the right note.” says and signs off Music Director Naren Balakumar.