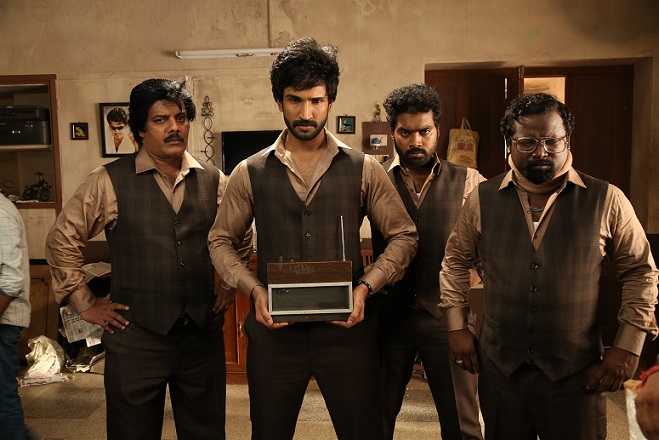 500, 1000 and even the latest 2000 is not enough to grab the green Emerald Coin (Maragatha Naanayam, because it is well protected by a group of spirit. In order to know how that Maragatha Naanayam can be reached, the audience has to wait for the release of upcoming film Maragatha Naanayam that has Aadhi and Nikki Galrani in the lead roles. Produced by G Dilli Babu under the banner Axess Film Factory, the adventurous-fantasy-comedy film Maragatha Naanayam is directed by debutante ARK Saravan which has a bunch of talented technicians that includes   Cinematographer PV Shankar, Music Director Dhibu Ninan Thomas and Art Director NK Rahul. It is to be noted that Versatile actor Anandaraj, Munees Kanth, Kaali Venkat, Arunraja Kamaraj, Danie, Koata Sinivasa Rao, Bramanandham, MS Baskar, Mime Gopi and Muruganandham has played the pivotal roles in the film.
“The Audience would have seen Aadhi sir as a Action Hero, but our Maragatha Naanayam will portray him in a different dimension…The story of  Maragatha Naanayam will have serious lines, but it travels in a never before seen genre, Adventurous – Fantasy – Comedy. My heartfelt thanks to Producer Dilli Babu sir, who has given me complete freedom, which may not be given to other debut directors….It is my pleasure to work with Aadhi sir. He has done justification for each and every scene of the film….” says Director ARK Saravan
“Script is the hero of a film’ and this is the only motto of our  ‘Axess Film Factory’. We concentrate on content oriented films because, apart from business we want Audience to feel the real colors of Quality films. Our Maragatha Naanayam will be a perfect example for that…Infact we have specially picked up the story of Emerald (Maragatha Naanayam) from ninety other scripts….” says Producer Dilli Babu of ‘Axess Film Factory’.
“Maragatha Naanayam will not have  the normal standard  Action scenes or Commercial items…..but the Audience will enjoy the film till the last second because of complete new and fresh humor concept…I am quite confident that the Emerald (Maragatha Naanayam) will bring good times for my new avatar….” says Aadhi, the lead of Maragatha Naanayam confidently.