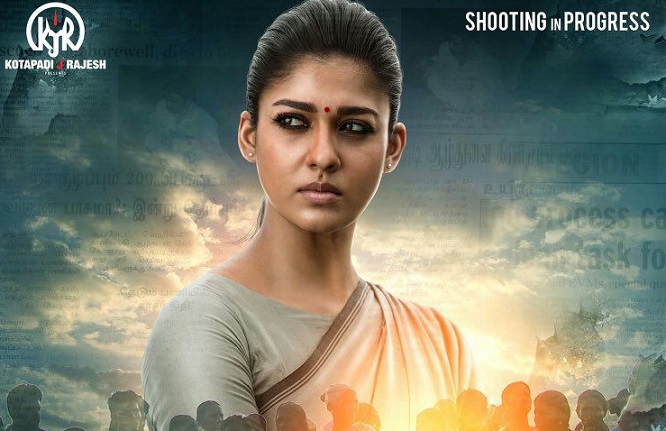 “Have Desire to do Good (ARAMM Seiya Virumbu)…Good things will follow you automatically…” is an old saying which seems to be true in everyone’s life. The one powerful word that connects the entire universe apart from language, colour, religion and cast is ‘ARAMM’ (Doing Good). This will be proved by the upcoming Women – Centric film ‘ARAMM’ that has Queen Bee Nayanthara in the lead role.
Directed by debutante Gopi Nainar, the film  ‘ARAMM’ is bankrolled by Kotapadi J Rajesh under the banner KJR STUDIOS. Touted to be the most anticipated film of Nayanthara, the film ‘ARAMM’ has ‘Kaaka Muttai’ fames Vignesh – Ramesh in crucial roles, and Velu Ramamurthy, E Ramdass, Sunnu Lakshmi, Raams in the prominent roles. It is to be noted that the film ‘ARAMM’ in which Nayanthara plays as a District Collector is well backed up by a bunch of talented technicians that includes Director of Photography Om Prakash, National award winning Art Director Lalgudi Ilayaraja, Editor Gopi Krishna and one of the leading stunt choreographers Peter Hein.
“The story is based on a true incident. It is about a collector who wants to do Good for her People, and hence we have gone for the title ‘ARAMM’. Nayanthara Mam has given a new meaning to the word ‘Collector’ by her outstanding performance. We are planned to release the first look poster of our ARAMM on the Bi(g)rthday of Naynthara, and right now we are very much happy to see that our first look is going viral and trending, just like the ‘Queen Bee’. We are pretty sure that our ‘ARAMM’ will bring good things to the society very soon….” says Director Gopi Nainar confidently.