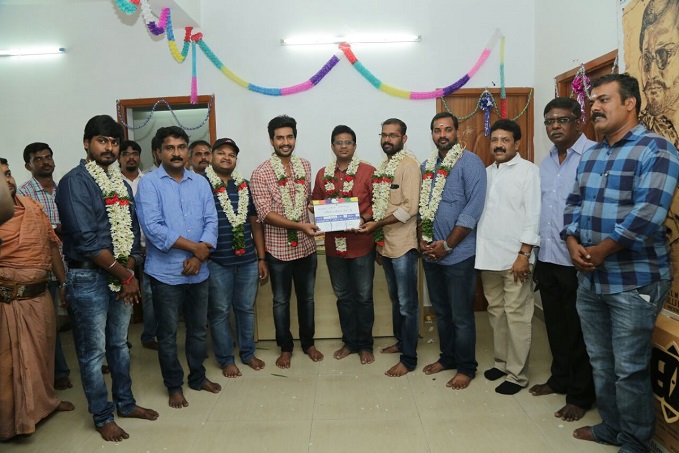 The line that creates difference between the successful films and the mediocre films is, always been a script. Around 150 films have been released so far in 2016, but among them, only few had the potential to win the hearts of the Audience. Hence cherry – picking a script according to the choice of the Audience is the uttermost important task of a Producer. In that case, it can be confidently said that Producer G Dillibabu of Axess Film Factory is emerging as a master in it. Stepped into Production industry by the most acclaimed film ‘Urumeen’, Producer G Dillibabu’s next flick ‘Maragadha Naanayam’ starring Aadhi and Nikki Galrani is creating more expectations among the Audience. And now Axess Film Factory has stepped into their third production venture that has Hero Vishnu Vishal, the Man with the Golden form, in the lead. The untitled project has been commenced on 11.11.16 (Friday) with a traditional Pooja in Chennai.
Directed by Ram Kumar of ‘Mundasupatti’ fame, the untitled Project has Kaali Venkat, Munish Kanth in the pivotal roles, and it is well backed up by a bunch of talented technicians that includes Music Director Ghibran, Cinematographer PV Shankar, Art Director A Gopi Anandh and Costume Designer A Keerthi Vaasan. It is to be noted that ‘Skylark Media’ Sridhar is joining hands with Axess Film Factory through this flick.
“Fridays are the magical days in Film Industry, and hence we have commenced our production works on 11.11.16 (Friday) with the traditional Pooja…The search operation for female lead and other technicians is on, and we are planned to go on floors from 29th November, 2016….” conveys Producer G Dillibabu of ‘Axess Film Factory’ in an enthusiastic tone.