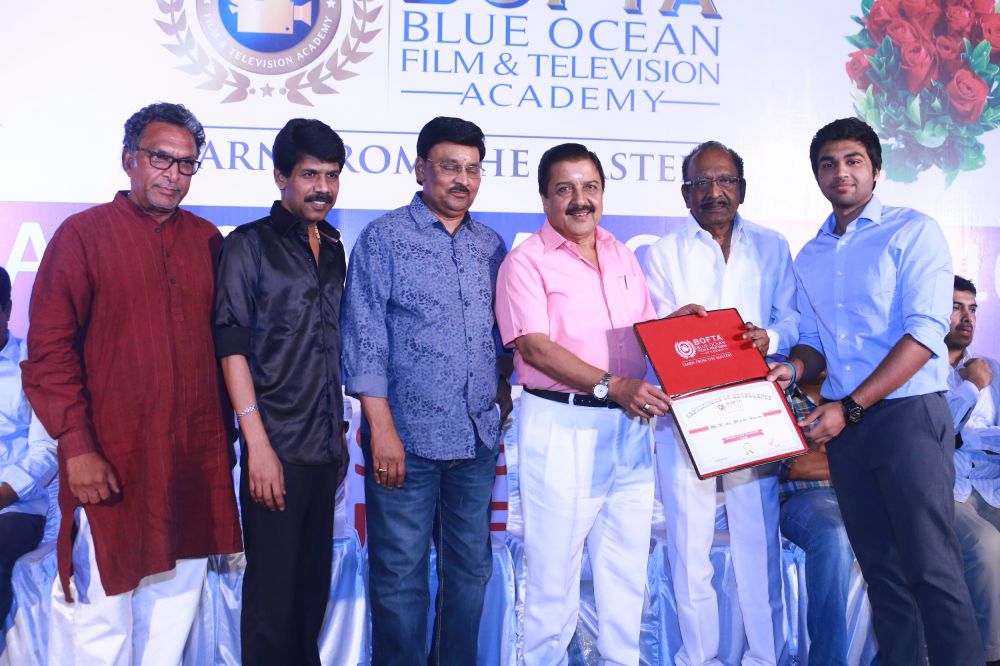 BOFTA (Blue Ocean Film & Television Academy), based at Chennai has emerged as the premiere Film Institute in Tamil Nadu with legendary Directors, Actors, Editors and Cinematographers teaching and training the students under the concept of ‘LEARN FROM THE MASTERS’. Truly, at BOFTA, only Masters of the respective field teach and train the students, which makes the film institute unique and specialized in all aspects.

Started on 1st January 2015, the academic year of BOFTA began on 1st July 2015 and on completion of the first batch of Filmmaking/Direction, Cinematography, Acting, Editing and Film Production in July 2016, Team BOFTA celebrated with a Convocation event for the students, which was attended by several legends and achievers of the film industry.

The convocation event was presided by legendary actor Sivakumar, who presented the awards to several students. Along with him Director N. Lingusamy, Director Bala and Director and Cinematographer Rajiv Menon graced the occasion and presented the awards.
From BOFTA, its Masters, Directors Mahendran, K. Bhagyaraj, Manobala, Cheran, Sasi, S.S. Stanly, John Mahendran, Editor and Director B. Lenin, Actors Nasser and Rohini, Cinematographers B. Kannan, Mahesh Muthuswamy, A. Ramesh Kumar and CJ. Rajkumar were present to give away the awards and speak on their training methods. Founder-Director of BOFTA, G. Dhananjayan organized the event, which was lively with most legends lauded the initiatives taken by BOFTA to bring so many legends and achievers under one platform and train the students.

The event began with Director Mahendran and Director Bala unveiling the portrait of the Best Teacher Tamil Cinema had, Director Balu Mahendra. BOFTA has a Knowledge Centre in the name of Balu Mahendra as his collection of books were kept in a separate room for the benefit of students.

BOFTA’s one year course on various streams produced 20 Diploma holders in Direction, 17 in Acting, 22 in Cinematography, 9 in Editing and 2 in Film Production after they passed out all the tests on their learning and presented their year-end project work. Each of them were presented with Diploma certificates. Along with that several students were presented with Gold Medals for their short films and performances.

During the event, select films of the students of BOFTA were screened, which were appreciated by everyone present. Also, the second issue of BOFTA’s in-house journal BMV (BOFTA MASTER’s VOICE) was released by Actor Sivakumar, which was received by Director Bala.

The grand gala event was attended by all the Diploma earning students along with their parents. Most of the speakers explained the need to give time to students to prove their worth and advised the parents to have faith in their children, until they emerge successful in the industry. Students and parents were delighted to hear the advise coming from eminent legends and were thoroughly impressed with the event, for the way it showcased the talents of students, presented the Diploma and Awards to students and the excellent speech from most speakers.

Team BOFTA has now fixed 5th September as the date every year for convocation for all future batches to coincide with the Teacher’s Day.