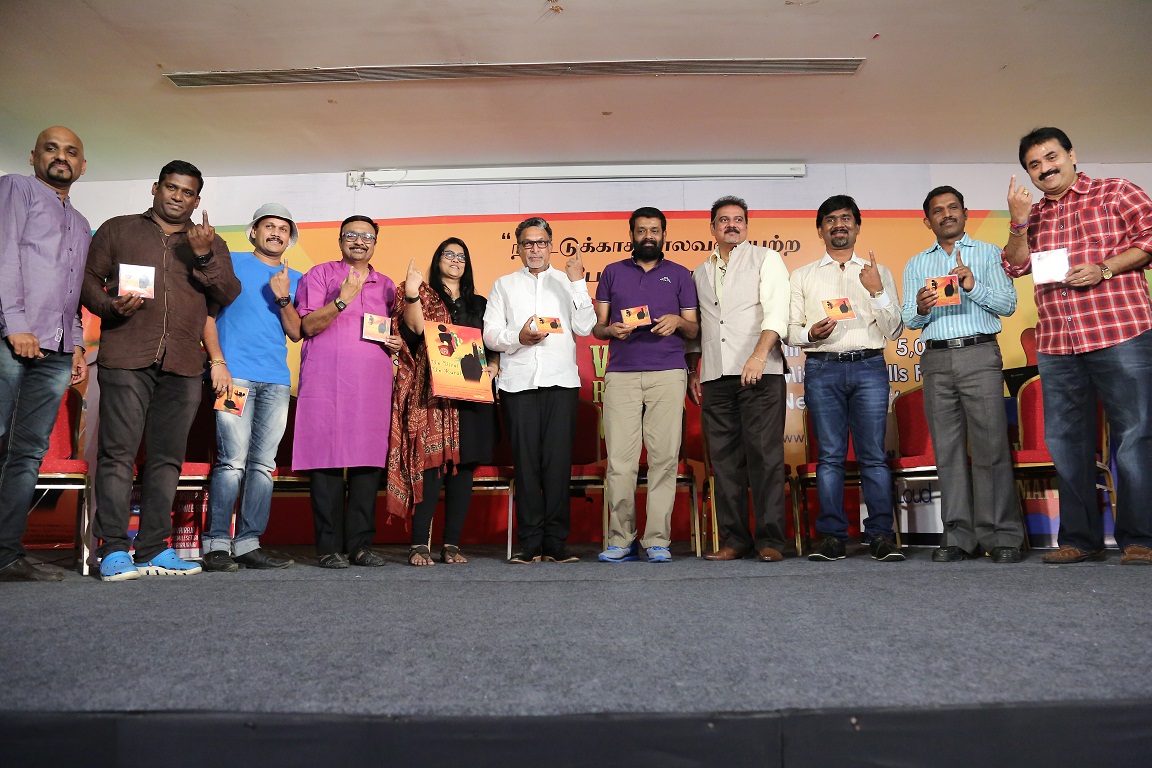 In an unprecedented event, TrendLoud-Smile Settai – a wildly popular new YouTube channel, in partnership with TrendLoud – the digital media platform of Vision Time India Private Limited, pulled off a Milestone in LIVE Broadcasting and call-to-action. The premise? A Talk Marathon which was on LIVE MODE for more than 120 hours as on May 7, 2016 from AM center, United India Colony Kodambakkam, with the goal of reaching 5 lakh missed calls, aimed predominantly at the younger generation which according to election commission of India will number 10 Million (1 Crore) in the upcoming Tamilnadu Assembly Elections. This in turn would signify an equal number of unique voters participating in the upcoming Tamil Nadu Assembly elections. No down-times, no-sleep (not all at once.) tantrums are fine as long as you keep at the job. Just non-stop talks day after day, on LIVE MODE on TrendLoud-Smile Settai YouTube channel https://www.youtube.com/watch?v=dfzlNTotpcI and https://www.youtube.com/watch?v=vDIKsOX06w8 till the aforementioned goal is reached. The conclusion? A total of 5 lakh missed calls reached by Saturday, May 7, 2016.

The showcase, which began on the 2nd of May (Monday) 10 AM concluded well on Saturday was marked by numerous peaks and milestones throughout the journey. It had prominent celebrities such as actors Bobby Simha, Nikki Galrani and musician Leon James, Vishal Chandrashekar appeard on stage to pledge their support and talk about their views on politics and other related topics. Some celebrities such as Parthiepan and Karthik Subburaj showcased their support via social media and WhatsApp. RJ Balaji took a break from his tour and ensured that he shared his support by a Phone-In to the Talk Marathon by TrendLoud-Smile Settai. A plethora of common people called in to voice their opinions and urge people to vote in the upcoming Tamil Nadu Assembly Elections.

Two in particular stand out: a 7th standard kid phoned in on Day 3 (May 4,2015) and realizing that he had yet to reach the eligible age to vote, decided instead to use that as a point in urging people to vote. That, for the majority of those watching, was a winner. The other caller who won hearts & minds was a 3-year old girl, calling in and urging the same. Incidents such as these and further support from big names such as Sivakarthikeyan and Venkat Prabhu through their twitter made ‘Vai Raja Mai’ a Memorable Success. The event had a number of mutating themes and at the end of Day 5; a new initiative under the hash tag #VaaThalaivaChallenge was under way. It openly challenged and invited politicians through the phone or on stage to face the panel and the keen curiosity of their fans. An early taker of this challenge was V. Ponraj – Head of the Abdul Kalam Vision India Party.

Apart from this Un Veral Un Kural a short documentary on voter awareness was also launched at the venue by President of Nadigar Sangam, Actor Dr. Nasar and the copy was received by Charismatic Director Vasanth. Un Veral Un Kural is a documentary to create an awareness among voters in line with the TrendLoud – Smile Settai idea of Vai Raja Mai to make use of their voting rights. Produced in the public interest by Josyula S Shekar for Need Trust and created and directed by award winning filmmaker Rajitha Kalpradha. This 2 minute and 40 second Video is available on You Tube and Social Media.

Josyula Shekar the producer of Un Viral Un Kural and of Need Trust said that “Un Veral Un Kural as a concept is so synonymous to Vai Raja Mai, as both in synergy has conveyed the use of power in your finger to choose the fate of tomorrow”.

Dancer and Actor Kadhal Kanthas who was present there to grace the occasion said that “How the quality of life changes when marriage happens in the same manner every vote polled changes the status of a country as such”.

Comedian, Performer and Actor Robo Shankar said “to get to vote happens with wait and the wait is worth it and our right our duty it’s our effort which will make TN100Perecent”.

Gracing the occasion as another Guest of honour was Kaliamurthy Balamurugan, IFS pointed that “ India is lab for Democratical experiments and participation inside that happens when we Vote and this has taken 62 years for us to realize that we have give our 100 Percent effort. But it is good that effort is made atleast now to get 100 Vote”.

Director Vasanth who chaired the finale of Vai Raja Mai said “ I see the real power of Youth through this effort, commendable as similar to TN100PERCENT. Never have doubt on Faith, have Faith in Vote and we will have to get 100 PERCENT, I believe in that”.

Presiding over the finale President of Nadigar Sangham and Actor Naser added “My inner soul wanted me to join this team Vai Raja Mai, with loads of belief in what they have done here over 130 hours, as floods in Chennai gave a lot of hope likewise I am moved with this effort too. While inking the finger it will make your soul stir and make a True Indian wake up. Enjoy Voting, Be Free, Feel free and Be Bold”.

Speaking of the event, Chidambaram Natesan, CEO of TrendLoud, said: “The event was a humbling and re-assuring experience. With very modest resources and a little bit of push, TrendLoud-Smile Settai managed to punch beyond our combined weight.” Chidambaram also had words of appreciation to say about the crew: “they all, including the technical and communication staff, worked day in and day out to achieve the milestone that had been set. Vai Raja Mai really was a single unit as individuals had to sacrifice their commitments in order to reach the finish line.”

Indeed, if nothing more than good ideas, good communication, and a little bit of charisma can cut through the noise and grab people’s attention, then Vai Raja Mai is a testimony to the above statement. Of course, there’s the added bonus of 5 lakh voters who have committed to Vote in the upcoming Tamilnadu Assembly Elections on May 16. Trendloud hopes that the initiative went miles and beyond in providing great entertainment while also firmly driving across the importance of participating in the elections, staying true to the essence of the channel.

TrendLoud is the Digital Platform of VISION TIME INDIA Pvt. Ltd. After firmly establishing a stronghold on television and mass media advertising, our key focus is Internet media production, celebrity ORM, digital media marketing services to businesses and content licensing on online media portals. TrendLoud believes in doing set of services, but doing them head and shoulders above available options and more importantly, doing them efficiently. A content player with focused approach in enabling content reach target audience TrendLoud has made a credible impact in the way Content is consumed in South in particular.

TrendLoud – Smile Settai is a fresh, edgy, in your face YouTube network that talks to you about what really matters today! Launched about Six Months Smile Settai content which is based on latest news and happenings topped with comedy as the nerve center. With 45, 70, 375 views and counting the Channels Popular content to out are Check out Beep Show, Dumbest Review. Part of the TrendLoud Channel network the effort by the team to accumulate viewership and repeat viewership has been a success story in itself.