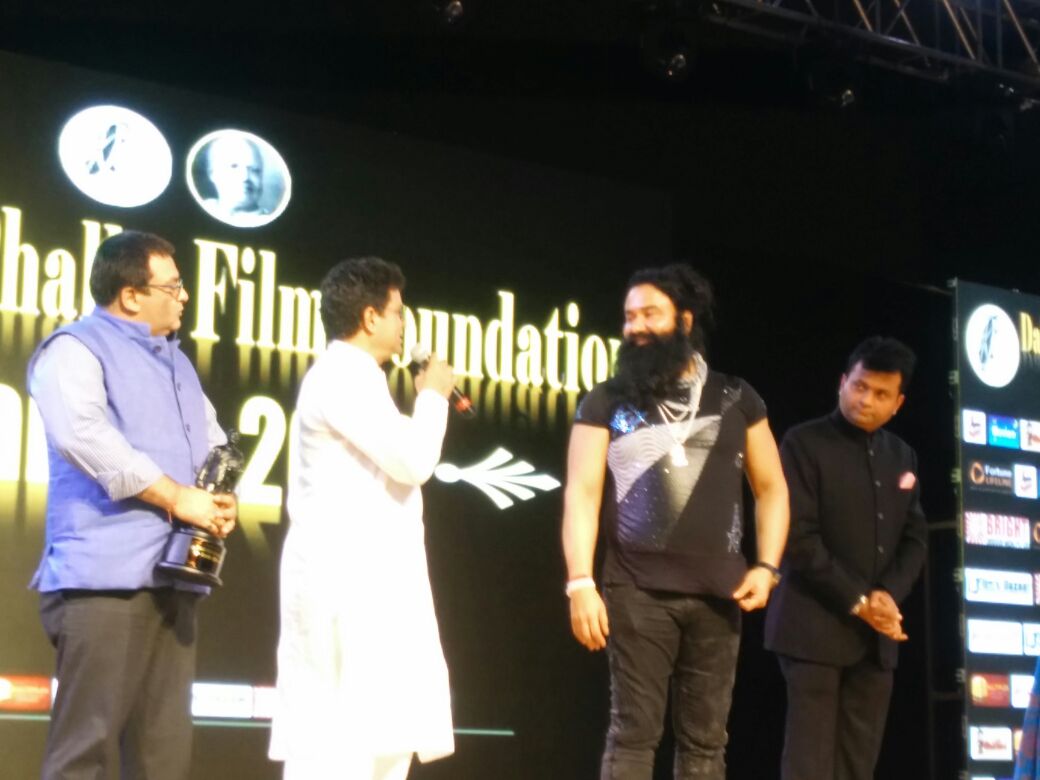 Fans of Rockstar Saint Gurmeet Ram Rahim Singh Ji Insan, have just got more reasons to cheer, apart from MSG-2 being a blockbuster hit and entering the coveted 500 Cr. Club and having completed more than 220 days in cinemas.
On Sunday night, Rockstar Saint, MSG was honoured with the prestigious Dadasaheb Phalke Film Foundation Award, 2016 for most popular Actor, Director & Writer in a star studded evening at Tulip Star Hotel, Juhu. The event began at 7 pm, with the National Anthem, followed by lighting of the Lamp by Dr. MSG along with Ashfaque Khopekar, the Chairman of the Foundation. A panel comprising of distinguished personalities from different facets of Film Industry including Anees Bazmee, Saroj Khan, Ismail Darbar, Udit Narayan, Mrs. Runa Lula, Kamlesh Pandey, Anup Jalota, Manoj Desai formed the Jury for the Dada Saheb Phalke Film Foundation Awards 2016.

Many eminent film Personalities including Manoj Bajpai, Madhur Bhandarkar, Priyanka Chopra were given the award for cinematic excellence.

The Chairman M. Ashfaque Khopekar, described “Dr. MSG as a social reformer, has initiated more than 119 welfare activities and is honored with more than 55 Guinness, Asia, Limca & countless other recognitions for noble causes. His contribution to Indian Film Industry is remarkable for making films on such causes.”

On his return to Sirsa, while addressing a throng of ecstatic fans, Saint Insan said that he was happy that the idea of cinema for social change has taken firm roots and people are transforming their lives by quitting drugs and alcohol. The campaign to use of films for bringing change amongst the youth will march on with a renewed vigour after this recognition . The Saint also called upon mainstream industry to commit themselves to the idea of cinema as a transformative vehicle for social reform through healthy entertainment.

As soon as MSG tweeted ”Good news 4 all of U! Honored wid Dadasaheb Phalke Film Foundation Award for most popular Actor,Director&Writer. ‪#MSGdedicatesAwardToGuruji‬‬”. The entire twitterati & social Media seem to be flooded as this hashtag trended worldwide. The Fans lined the entire highway from Delhi to Sirsa on his return, with their balloons wearing colorful costumes to welcome & honor their favorite superstar. Saint Dr. Gurmeet Ram Rahim Singh Ji Insan described the award as a testimony to the fact that the Film is being loved & appreciated by all & the impact is now being recognized by mainstream Bollywood Industry. Indeed a proud moment for the entire star cast and crew of the Film MSG-2 The Messenger!